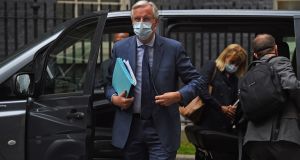 The EU’s chief Brexit negotiator Michel Barnier: the report hiked tensions ahead of the start of the latest round of Brexit talks in London on Tuesday. Photograph: Kirsty O’Connor/PA Wire

The implementation of last year’s Brexit withdrawal agreement that sets out special conditions for the North in order to avoid a hard border with the Republic is a “prerequisite” for a deal to be reached with Britain, the European Commission has said.

It came as diplomats and officials in Brussels expressed shock at British government plans to override aspects of the withdrawal agreement, in which prime minister Boris Johnson agreed to checks on goods between Northern Ireland and Britain, in order to preserve an open border on the island.

“The full implementation of the withdrawal agreement and in particular the protocol on Ireland and Northern Ireland are essential,” a spokesman for the European Commission said.

“These are legal obligations under international law, this is a matter of trust, this is a prerequisite, a precondition for the negotiations on the future partnership. I think that’s clear and I don’t think we need to say any more.”

The internal market Bill, to be published on Wednesday, would “clearly and consciously” undermine the agreement on the North by revoking requirements for checks between the islands and an obligation for EU state aid rules to apply to the North, the Financial Times wrote, citing people familiar with the plans.

The report hiked tensions ahead of the start of the latest round of Brexit talks in London on Tuesday. A British government spokesman told The Irish Times there were “outstanding issues” with the Northern Ireland protocol, and that the administration was working on “fallback options” in case these could not be resolved.

On Monday the British government sought to play down the significance of planned legislation affecting the protocol, insisting that it remains committed to implementing the Brexit withdrawal agreement in full.

The British government on Sunday released comments from a speech set to be given by prime minister Boris Johnson, in which he declares that not reaching a deal “would be a good outcome for the UK” and insists that a deal must be reached by October 15th.

A failure to agree a free trade deal would make onerous tarriffs apply on trade between Britain and EU countries from January 1st, and is forecast to shrink the UK economy while heavily damaging neighbouring countries too, particularly Irish agrifood firms that export large amounts to Britain.

Crashing out would mean the collapse of agreements covering everything from the recognition of driving licences to mobile phone roaming charges, and the European Commission and the Irish Government have urged citizens and businesses to prepare.

In his first interview since Britain left the EU in January, London’s chief negotiator David Frost over the weekend said that Britain was not “scared” of a crash-out exit and that Britain was going to be “an independent country” and not a “client state”.

EU capitals find such rhetoric offensive as it implies that member states are not independent.

Germany’s ambassador to the UK Andreas Michaelis remarked that Germany had signed “hundreds of international treaties”, and wondered if it could still be considered an independent country.

“Underlying compromises have certainly not eroded our sovereignty,” the ambassador wrote.

Official and diplomatic sources across Brussels expressed disbelief at the developments from Britain and exasperation that Britain appeared to be reversing prior commitments, eroding the trust needed to agree anything in future.

“The Frost-Johnson sabre rattling was wholly expected hullaballoo before this round, but the changing of the foundation of the withdrawal agreement would be an incomprehensible miscalculation,” an EU diplomat told The Irish Times.

“Unless of course the UK is not looking to take back control but just isolate itself entirely on this continent.”