The EU's chief Brexit negotiator Michel Barnier has used a speech at Belfast's Queen's University to warn that Northern Ireland will be the part of the United Kingdom worst hit by Brexit. Video: Reuters 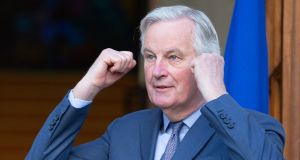 EU chief negotiator on Brexit Michel Barnier at Government Buildings in Dublin on Monday: ‘A new clock is ticking.’ Photograph: Tom Honan for The Irish Times

The EU “will not turn its back on Northern Ireland” after Brexit, the EU’s chief negotiator, Michel Barnier, has said during a speech at Queen’s University, Belfast.

Mr Barnier told academic and business leaders and politicians on Monday evening that, even as Northern Ireland leaves the EU on January 31st, “you can continue to count on our support.”

He also said that the rights of EU citizens in Northern Ireland would be protected after Brexit, and Irish citizens in the North “will still be EU citizens”, and will continue to be able to move and reside freely within the EU.

“The UK has committed to upholding their rights,” he said. “They cannot be discriminated against on the basis of nationality.”

The EU has previously approved a guarantee that Northern Ireland would again be an EU member as part of a united Ireland.

Mr Barnier was delivering a speech, Reflections on Brexit and the European Union, as a guest lecturer at the Queen’s Management School’s William J Clinton Leadership Institute.

During his speech, Mr Barnier was clear that there would be regulatory checks at Northern Ireland’s ports and airports for goods entering Northern Ireland from Great Britain. “The UK has chosen to become a third country, to leave the single market and the customs union,” he said.

“It has chosen to create two regulatory spaces. This makes frictionless trade impossible. It makes checks indispensable. We will need sanitary and phyto-sanitary checks on food products and live animals.”

The British prime minister, Boris Johnson, has promised “unfettered access” for goods moving to and from Northern Ireland and Great Britain post-Brexit.

Asked by reporters about this apparent contradiction, Mr Barnier stressed that the Withdrawal Agreement was a legal text which must be implemented precisely and in its entirety. As the UK prepares to leave the EU, Mr Barnier said that “a new clock is ticking”.

“Negotiating the future partnership between the EU and the UK is another huge challenge,” he said, describing the 11-month window committed to by Mr Johnson to reach a deal as “extremely short”.

Mr Barnier said the UK could not “expect high-quality access to our single market if it insists on competing on state aid, social or environmental standards”.

Earlier on Monday Mr Barnier met the Taoiseach, Leo Varadkar, before travelling North to meet the Deputy First Minister, Michelle O’Neill of Sinn Féin, and Minister for the Economy Diane Dodds of the DUP, who was representing the First Minister, Arlene Foster.

We will say goodbye to an old friend embarking on an adventure. We hope it works out for them

Speaking alongside Mr Barnier at Government Buildings on Monday morning, Mr Varadkar told reporters he was “absolutely relieved” that the first phase of the Brexit process was over but “saddened” by the UK’s departure from the EU on Friday.

“We will say goodbye to an old friend embarking on an adventure. We hope it works out for them but if it does not, there will always be a seat kept for them at the table,” he said.

Mr Varadkar said negotiating a trade deal would be “very challenging” as “time is short”, but he was “very ambitious” for a future EU-UK trade agreement. However, he warned, there “has to be realism”.

If the next talks were seen as “a contest”, he said, then the EU is in a “very strong” position, with the single market being the world’s largest economy.