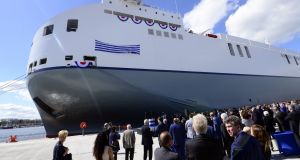 CLdN operates the MV Celine ship out of Dublin where it was launched in 2018. Photograph: Cyril Byrne

The largest shipping line connecting Ireland and continental Europe says it can “dramatically” increase its services if there is a hard Brexit.

Luxembourg-based shipping line CLdN operates direct ferries seven days a week between Irish ports and mainland Europe, connecting Dublin with Zeebrugge in Belgium and Rotterdam in the Netherlands, and Cork with Zeebrugge with journey times of about 38 hours.

Sjors Bosvelt, CLdN’s head of sales based in Rotterdam, said the shipping line has plans in place to provide further services should a disorderly Brexit at the end of the standstill period on December 31st result in delays with new checks at British ports that congest the landbridge.

“We have contingencies to allow us to dramatically increase capacity in the event that there is a hard Brexit,” he said.

“With our own fleet of vehicles, we have, to a large extent, flexibility in allocating capacity to where demand is, answering to the volatility in each market.”

The likelihood of a disorderly end to the transition period has risen in recent days with talks between the European Union and the UK on a future trade deal stalling due to disagreements over fishing and state assistance to businesses.

CLdN operates the MV Celine ship out of Dublin where it was launched in 2018. It is the world’s largest short sea “roll-on, roll-off” ship with a capacity of 8,000 lane-metres of space.

Last year the company launched a smaller ship called the MV Laureline that has a capacity of 5.4km of lane metres, increasing the company’s capacity on direct sailings between Dublin Port, the country’s largest port, and mainland Europe by 20 per cent.

The company, which began sailing to Dublin in 2009, accounts for 40 per cent of all units moved between Dublin and continental Europe, averaging about 4,500 freight units a week or 116,000 a year each way.

The UK landbridge remains the fastest and cheapest route between Ireland and continental Europe for importers and exporters, with most drivers using Holyhead, Liverpool and Dover.

It takes about 20 hours to reach mainland Europe across the landbridge, about half the time of direct ferry services to ports in Belgium and the Netherlands.

Delays arising from border checks between the UK and the EU once Brexit comes into effect at the end of the year risk making the route unworkable for time-sensitive cargos.

UK government minister Michael Gove has warned that post-Brexit border checks could lead to queues of 7,000 lorries outside Dover and two-day delays to cross the English Channel.

Mr Bosvelt said demand for direct ferry services to mainland Europe would depend on Brexit but that the company was “poised to make sure our direct offerings continue to grow as proven in the last 11 years where we have reacted to demand on every occasion”.

The company has no plans to operate a shorter, direct “ro-ro” service of about 20 hours for lorry drivers between Ireland and France. Mr Bosvelt said the company’s business model does not require drivers or speed but relies on “frequency and reliability”.

“Our studies show only a small minority of goods require a 20-hour lead time and [this] is borne out by a high percentage of our customer base being supermarket goods,” he said.

In the event of a hard Brexit, Irish hauliers have called for a daily ferry between Ireland and northern France that could roughly match the UK landbridge for speed and time.

Almost 40 per cent of exports counted by freight units to continental Europe are transported over the landbridge, according to a report by the Irish Maritime Development Office. More than 80 per cent of “ro-ro” lorry traffic passing through Irish ports travels through UK ports.