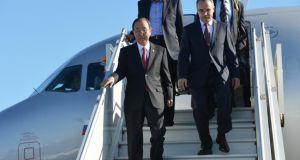 Secretary general of the United Nations Ban Ki-moon arrives in Russia ahead of the G20 summit. Photograph: Alexey Kudenko/RIA Novosti via Getty Images

United Nations secretary-general Ban Ki-Moon will attend the Group of 20 summit in Russia to keep alive an initiative for a peace conference on Syria.

Mr Ban will arrive in St Petersburg, the hometown of president Vladimir Putin, accompanied by the UN’s special envoy for Syria, Lakhdar Brahimi.

The two-day summit, which started today, will be attended by world leaders including US president Barack Obama, Chinese leader, Xi Jinping, and French president Francois Hollande.

“While the world is focused on concerns about the possible use of chemical weapons in Syria we must push even harder for the international conference on Syria to take place in Geneva,” the UN chief said in an e-mailed statement today.

US military action against Syria would probably derail plans for a resumption of peace talks in Geneva, Russian foreign minister Sergei Lavrov said on Monday.

The US canceled a planned meeting with Russia last month aimed at preparing for the conference proposed by the two countries. Russia is in disagreement with the US over accusations that its Soviet-era ally Syria used chemical weapons against civilians. Mr Obama is seeking approval from Congress to attack Syria with punitive strikes, which Russia says would violate international law and amount to an act of aggression.

The European Union supports a political solution to the more than 2 1/2-year conflict in Syria, which has killed more than 100,000 people, European Commission president Jose Barroso said today in St. Petersburg.

“We need to forge a consensus in the international community on how to respond to the latest developments and also on how to put an end to this conflict,” Barroso told reporters.

“This abhorrent situation remains a stain on the world’s conscience.”