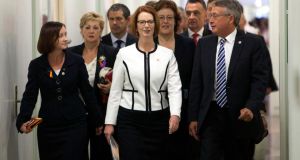 A meeting was called after party elder Simon Crean had dramatically intervened earlier in the day, demanding the leadership be put to a vote to end what he said was the “disunity” in the party.

His move came after weeks of mounting speculation about a move against Ms Gillard, who is so far behind in polls that Labor is expected to lose power in a landslide in the federal election in September.

Mr Crean said he would put his name forward to become deputy leader of the party and would back former Labor prime minister Kevin Rudd as leader.


Party caucus
Before question time in parliament, Ms Gillard announced that there would be a Labor Party caucus at 4.30 to vote on the leadership. After just three questions from Opposition leader Tony Abbott, Mr Abbott tried to move a motion of no confidence in the prime minister. It failed and Ms Gillard ended question time.

But nine minutes before the caucus meeting, Mr Rudd, who was deposed as Labor leader and prime minister by Ms Gillard three years ago, announced that he would not run.

Mr Rudd said this was because after his failed challenge to Ms Gillard a year ago, he said he would not run again unless a majority of caucus asked him to do so.

“When I said I would not challenge for the Labor leadership I believed in honouring my word,” he said. “This is a difficult day . . . but I take my word seriously . . . I suggest to all and sundry across the party that we ensure Tony Abbott does not walk [into power].”

The caucus meeting went ahead and Ms Gillard was duly re-elected unopposed and unanimously, along with her deputy Wayne Swan. Mr Crean did not stand for any position and it has emerged he was sacked from his ministerial portfolio by the prime minister.

Ms Gillard said she was grateful to her colleagues for their support.   “I accept their continued support with a sense of deep humility and resolve,” she said. “I only ever sought office in the interests of the nation. It is in that spirit that I continue to govern.”

Ms Gillard added that the leadership tension in the Labor Party was now over. “The whole business is at an end.”