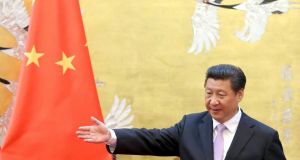 In the 1960s, left-wing students across the globe waved Chairman Mao Zedong’s “Little Red Book” of doctrinaire aphorisms as their way of showing their political steadfastness.

These days, the ideologues are turning to President Xi Jinping’s very own app, which features the works, theories and thoughts of the Chinese leader, easily accessible on your smartphone or tablet.

The free app, which was developed by the Party School of the Communist Party of China Central Committee, makes available Xi’s books including The Governance of China and Shake off Poverty, as well as quotations and a collection of his speeches.

“Everyone who uses this app can find their own interests. Not only can people learn Communist Party theory, but also other knowledge, such as traditional culture and math,” Chen Jiancai, the site’s deputy editor-in-chief, told the Beijing News.

The home page has a thoughtful, cheerful-looking Mr Xi in a circle, with a selection of options, including commentaries on his thoughts by experts from the school.

Unsurprisingly, the app has a lot of tutorials about anti-corruption, given that the crackdown on graft is a plank of Mr Xi’s administration, but there is plenty of information as well about rule of law and knowledge maps.

Some readers are uncomfortable, fearful that Mr Xi is following in Chairman Mao’s footsteps. Since the cult of personality around Mao, which resulted in the disastrous period of ideological frenzy called Cultural Revolution, which destroyed thousands of lives, the Communist Party has shied away from highlighting individual leaders. But Mr Xi has been a much higher-profile individual leader than his predecessors.

Where the individual element is most apparent is in the references to “Xi Dada”, which translates loosely as “Uncle Xi” or “Daddy Xi” but also has powerful overtones of “Big Big”.