Vanuatu president appeals for help in wake of Cyclone Pam

One of the Pacific Ocean’s most powerful ever storms Cyclone Pam has devastated the island nation of Vanuatu, reportedly killing dozens, aid officials have said. The United Nations is preparing a major relief operation. Video: REUTERS 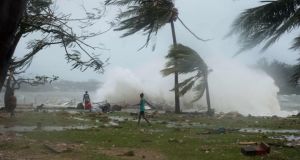 Many residents in Vanuatu have spent a second night in emergency shelters after a powerful cyclone damaged or blew away their homes, aid workers said.

Cyclone Pam tore through the tiny South Pacific archipelago with winds of 270 kilometers per hour early on Saturday, leaving a trail of destruction and unconfirmed reports of dozens of deaths.

Power remained out across Vanuatu throughout Saturday and people on many of the outer islands had no access to running water or outside communications, according to Chloe Morrison, a World Vision emergency communications officer in the capital Port Vila.

Ms Morrison said communications have been so problematic that her aid group has not yet been able to account for many of its own 76 staff on the islands and authorities have been unable to assess the extent of the damage.

“I can say that for anybody who wasn’t in a secure shelter last night, it would have been a very, very tough time for them,” she added.

Ms Morrison said authorities did a good job of moving thousands of people in Port Vila into 23 evacuation centres. With the winds and rain easing on Saturday, many people stepped out only to find that their homes were missing a roof or had disappeared, and were forced to return to the shelters.

Teetering trees and downed power lines in Port Vila have made many areas hazardous, she said, adding that she had heard reports of entire villages being destroyed in more remote areas.

“It’s still really quite dangerous outside. Most people are still hunkering down,” she said.

Unicef estimated that 54,000 children were among those affected by the cyclone.

UN Secretary General Ban Ki-moon said the impact and scope of the disaster caused by the cyclone was not yet clear, but he feared the damage and destruction could be widespread.

“We hope the loss of life will be minimal,” he said during the World Conference on Disaster Risk and Reduction in Japan. The UN said it was preparing to deploy emergency rapid response units.

The president of Vanuatu, Baldwin Lonsdale, who was attending the conference, told participants: “I do not really know what impact the cyclone has had on Vanuatu.

“I am speaking to you today with a heart that is so heavy. I stand to appeal on behalf of the government and the people to give a helping hand in this disaster.”

Ms Morrison said the first priority was to ensure people had adequate food, drinking water and shelter. Beyond that, she said, there would need to be a long and concerted rebuilding effort in the months ahead.

She said the winds peaked between about midnight on Friday and 1am on Saturday. A westward change of course put populated areas directly in the path of Cyclone Pam.

The UN Office for the Coordination of Humanitarian Affairs said there were unconfirmed reports of 44 deaths in Vanuatu’s northeastern islands after Pam moved off its expected track.

“There are destructive winds, rain, flooding, landslides, sea surges and very rough seas and the storm is exceedingly destructive there,” she said. “We are still assessing the situation, but we stand ready to assist.”

The small island nation, located about a quarter of the way from Australia to Hawaii, has repeatedly warned it is already suffering devastating effects from climate change with the island’s coastal areas being washed away, forcing resettlement to higher ground and smaller yields on traditional crops.

Scientists say it is impossible to attribute single weather events like Cyclone Pam to climate change.

The cyclone has already caused damage to other Pacific islands, including Kiribati and the Solomon Islands. Authorities in New Zealand are preparing for Cyclone Pam, which is forecast to pass north of the country on Sunday and Monday.