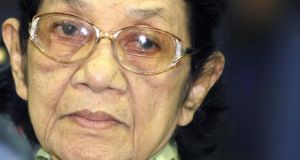 Ieng Thirith, a Khmer Rouge leader who was the highest-ranking woman in the genocidal regime that oversaw the death of nearly two million Cambodians in the late 1970s, has died aged 83.

Ieng Thirith was a sister-in-law of the movement’s late supreme leader, Pol Pot.

A Sorbonne-educated Shakespeare scholar, she served as minister of social affairs and was married to Ieng Sary, the regime’s former foreign minister, who died in 2013 aged 87.

Her son, Ieng Vuth, said she had been suffering from dementia, heart problems and other health issues.

Thirith was put on trial by a United Nations-backed tribunal seeking justice for crimes committed by the radical movement, but freed in September 2012 before its conclusion after being declared mentally unfit.

Thirith died in the old Khmer Rouge stronghold of Pailin in western Cambodia, the UN court said in a statement.

Her sister, Khieu Ponnary, was married to Khmer Rouge leader Pol Pot, who died in 1998.

The two couples were French-educated revolutionaries whose project to turn Cambodia into an agrarian communist state led to the deaths of about 2 million people through execution and starvation.

The legal case against Thirith was stayed after she had been found unfit to stand trial because of dementia, and she was released under judicial supervision, the court said.

Trump says Covid-19 will disappear after US reports record increase 07:02
Leicester lockdown could be just the start if tracing system not improved – Labour 22:30
Trumps to travel to South Dakota for July 4th despite rise in US coronavirus cases 20:33
World takes stock of Covid-19 drug after US snaps up supplies 20:24
Netanyahu misses target date for annexation of Palestinian territories 19:45