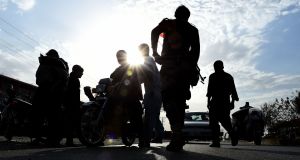 The Taliban and representatives of the Afghan government have restarted secret talks in the Gulf state of Qatar, senior sources within the insurgency and the Kabul government have told the Guardian.

Among those present at the meetings held in September and October was Mullah Abdul Manan Akhund, brother of Mullah Omar, the former Taliban chief who led the movement from its earliest days until his death in 2013.

The two rounds of talks are the first known negotiations to have taken place since a Pakistan-brokered process entirely broke down following the death in a US drone strike of Omar’s successor, Mullah Akhtar Mansoor.

Doha has been a centre for Taliban diplomacy since the movement was granted permission to set up an office in the Qatari capital in 2013, although that initiative became one of the many attempts to start a peace process that ultimately come to nothing following complaints from the Afghan government.

Mullah Omar’s son, Mohammad Yaqoob, is expected to soon join the Doha group, a Taliban source said, in a move that would further bolster the authority of the office.

No Pakistani official took part in either the October or September meetings, according to a member of the Taliban’s leadership council, the Quetta Shura. He said Islamabad has lost much of its traditional influence over a movement it has been associated with since it rose to power in Afghanistan in the mid-1990s.

But according to the Taliban official, a senior US diplomat was present in the Qatar meetings. The US embassy in Afghanistan declined to comment on the claim.

The Taliban official said the first meeting in early September “went positively and was held in a trouble-free atmosphere” in which Akhund sat face to face with Mohammed Masoom Stanekzai, Afghanistan’s intelligence chief.

A second meeting took place in early October, despite continued fighting between government and insurgent forces.

Recent weeks have seen the Taliban overrun Kunduz, a provincial capital, for the second time and threaten Lashkar Gah in Helmand.

Although an Afghan government official confirmed Stanekzai had made at least one recent trip to Doha, both Ashraf Ghani’s spokesman and Ismail Qasemiyar, a senior member of the High Peace Council charged with overseeing peace talks, denied any knowledge of the meetings.

The Quetta Shura member said the presence of a US official helped make the meeting possible given the Taliban’s long standing reluctance to meet directly with the Afghan government, which it publicly lambasts as a “puppet regime”.

“Taliban believes the Afghan issue is a dispute with both the US and Afghan governments,” he said. “If these three sides can hold preliminary meetings it could create a strong base for further positive developments.”

He said Mullah Akhund was “specially dispatched by the Taliban leadership council” to Doha to underline the importance it attaches to the talks.

“His presence made the talks more notable and shows that both the military and political Taliban are on the same page,” he said.

The Taliban movement has long been divided on the wisdom of peace talks between hawkish commanders fighting in Afghanistan and some members of its leadership based in Pakistan who have favoured talks.

Previous attempt to find a political end to the conflict have all failed. A western security official said the recent onslaught against provincial capitals was a “strong indication that the insurgents want to pursue a military strategy regardless of the politics”.

“But we keep hearing hints and indications that various figures in the Taliban leadership want to talk as well,” he said.