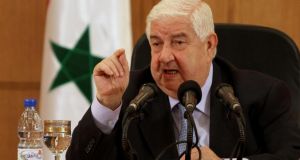 Syrian foreign minister Walid al-Moallem speaks during a press conference in Damascus yesterday. He said his country had defences that would “suprise” its antagonists. Photograph: AP

“We have two options: to surrender or defend ourselves with the means at our disposal . . . We will defend ourselves,” he told a press conference. He said his country had defences that would “surprise” its antagonists.

Mr Muallem said allegations that government forces had used chemical weapons in the Damascus area was a “pretext” to initiate a military campaign designed to serve the interests of Israel and al-Qaeda offshoot Jabhat al-Nusra.

United Nations inspectors investigating suspected chemical weapons attacks in Damascus have postponed their next site visit until today, having come under sniper fire on their way to a site visit on Monday

“Following yesterday’s attack on the UN convoy, a comprehensive assessment determined that the visit should be postponed by one day in order to improve preparedness and safety for the team,” a UN statement said.

“Syria can’t remove evidence in areas that are under militants’ control,” he said. He also asked: “Where were the UN inspectors when we requested them to inspect sites [of earlier chemical weapons use] five months ago?

“If this . . . campaign is meant to undermine the morale of our people, I believe [western leaders] are mistaken. The people of Syria are united with their armed forces and leadership.”

Several sources attending a meeting in Istanbul on Monday between Syrian opposition leaders and diplomats from Washington and other governments told Reuters that the rebels were told to expect military action and to get ready to negotiate a peace.

Action imminent
“The opposition was told in clear terms that action to deter further use of chemical weapons by the Assad regime could come as early as in the next few days, and that they should still prepare for peace talks at Geneva,” one of the sources said.

In spite of the cancellation by the US of a planned meeting today with Russian diplomats to prepare for the repeatedly postponed Syria peace conference in Geneva, the envoys in Istanbul including former US ambassador to Syria Robert Ford, a hawk on Syria, told the opposition coalition to prepare for the conference, now slated for October.

Russian deputy foreign minister Gennady Gatilov expressed regret over the postponement of the Russian-US meeting, while foreign ministry spokesman Alexander Lukashevich called on the West to be rational and “reasonable” over Syria.

Ankara could offer Nato allies the use of its military airbase at Incirlik and said it would take part in any military action against Syria whether mandated by the UN Security Council or not. Foreign minister Ahmet Davutoglu has termed the alleged use of chemical weapons by Damascus as “a crime against humanity” and said it “should not go unanswered”.

The US has asked Greece to provide military facilities in Kalamata in the Peloponnese and Souda Bay in Crete if Washington decides to mount a major intervention in Syria. Greece is prepared to assist the US but will not take part in any intervention, due to the possibility of a backlash.

In another development yesterday, ambassadors from 22 Arab League members meeting in Cairo held Syrian president Bashar al-Assad responsible for the toxic chemical attack. The formal statement, rammed through by Saudi Arabia and Qatar, was not unanimous, however. Lebanon and Iraq abstained while Algeria rejected the proposition.

Lebanese foreign minister Adnan Mansour said he opposed military strikes on Syria. “I don’t think this action would serve peace, stability and security in the region.”

No ‘launchpad’
Jordan said it would not serve as a “launchpad” for strikes on Syria. An unidentified official stated, “Jordan’s position has not changed.” Amman favours a political solution.

His remarks came as senior military officers from the US and nine other countries were winding up two days of consultations without comment.

Egypt has also expressed concern over western threats of military intervention in Syria. “UN teams are still working to collect evidence on whether or not [the government] used chemical weapons . . . but already some very conclusive statements are being made. It is disturbing,” stated an official. Cairo has been urging caution, fearing military strikes could “wreak havoc”.

China’s news agency, Xinhua, said western rhetoric and “the recent flurry of consultations . . . indicates that they have put the arrow on the bowstring and would shoot even without a UN mandate.

“That would be irresponsible and dangerous,” the commentary, which reflected the views of the government, said as the “current scenario is reminiscent of the lead up to the Iraq war, which the [US] staged [on the basis of] allegations about weapons of mass destruction that later turned out to be false.”

Beijing, regarded as an ally of Damascus, follows developments in Syria very closely.

The World Health Organisation has rushed out instructions for treating victims of chemical weapons attacks as Lebanon reported that at least four Hizbullah fighters have received treatment in Beirut hospitals after exposure to chemical agents in Syria. The men came in contact with these agents while searching a rebel tunnel in the Damascus suburb of Jobar where a store of chemicals was found.

Meanwhile, more than 50,000 refugees have sought sanctuary in the Kurdish region of northern Iraq over the last two weeks as fighting between Kurdish forces and fundamentalist jihadis has intensified. Some 1.9 million Syrians have fled the country while another five million are displaced within Syria.

A Russian cargo plane landed in the Syrian city of Latakia, delivering food aid and offering to repatriate Russian citizens.