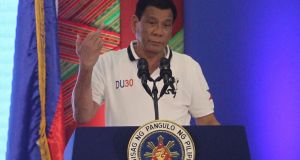 Controversial Philippine president Rodrigo Duterte has called on the European Union to show him respect, issuing a resounding “f**k you” to the bloc for criticising his war on drugs which has killed 3,800 people in 11 weeks.

“Even the EU is scolding me,” Mr Duterte said in a televised speech at an army base in his southern stronghold of Davao.

“When I was mayor, that was okay but it is different now because I am the president. Why would you insult me?” he said in a speech to, adding: “It is as if I am your subordinate.”

During a speech on Tuesday, Duterte said “f**k you” and raised his middle finger in an insulting gesture, saying the EU bore historical responsibilities for the murder of many people. He repeated this same “f**k you” message to the EU on Wednesday.

Mr Duterte is known for his deeply offensive remarks, having used “son of a whore” to refer to both Pope Francis and US president Barack Obama, and he called United Nations chief Ban Ki-moon a “fool”. He also threatened to leave the UN after criticisms of his drugs war, which was one of the platforms on which he won the presidency.

Last week the EU issued a statement calling on Mr Duterte’s government to “put an end to the current wave of extrajudicial executions and killings” and expressing concern about “extraordinarily high numbers killed during police operations”.

Mr Duterte’s populist style plays out well at home, but is placing his country increasingly at odds with some of its closest allies, particularly the US – he has previously referred to Washington’s ambassador to the Philippines as a “gay son of a bitch” and his remarks about Mr Obama led to the cancellation of a meeting with him planned on the sidelines of an Asian leaders summit earlier this month.

Last week, Mr Duterte called for US special forces to be withdrawn from the restive southern province of Mindanao, where they are helping in the fight against Muslim rebels.

He seemed to moderate these remarks slightly in his speech at the military base, acknowledging that Philippines needed US troops in the South China Sea, and saying he only wanted American soldiers out to ensure the success of peace talks.

“I said there will be some time in the future when I’ll ask the special forces to leave,” Duterte said in a speech to soldiers stationed near his home in Davao. “I never said, ‘go out of the Philippines.’ For after all, we need them in China Sea,” he said.