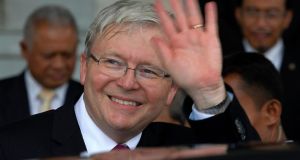 The Labor Party has risen dramatically in the polls since Kevin Rudd took over as party leader and prime minister. Photograph: Enny Nuraheni/Reuters

Two weekends ago, at the Australia match against the Lions in Sydney, former Labor prime minister Bob Hawke was overheard saying to current prime minister Kevin Rudd that “We could win this thing”.

He wasn’t talking about the rugby. Hawke was talking about the remarkable turnaround in Labor’s fortunes in the 10 days since Rudd had become prime minister for a second time after challenging Julia Gillard for leadership of the Labor Party. (Gillard did the same to him three years earlier.)

Another 10 days on, and the Rudd revival has continued apace. Labor has gone from being on the verge of losing in a landslide in the coming election, to being 50:50 with the Liberal-National opposition after preferences. Yesterday’s Sydney Morning Herald poll was the first time in three years that it showed anything other than a thumping for Labor.

Lost swagger
What had seemed for at least two years to be an unlosable election for the opposition might just be lost after all. Liberal party leader Tony Abbott has lost some of his prime-minister-in-waiting swagger and now sometimes resembles someone who thought they’d bought the house of their dreams only to find they’d been gazumped at the last minute.

There have been 10 polls since Rudd returned as prime minister and they all show Labor at 49 or 50 per cent after preferences, bar one polling company which has had Labor on 52.5 and then 54.5 per cent in its two polls. No one believes the latter to be anything other than an outlier, but it all feeds into the narrative – Labor has a chance of retaining power.

A month ago, in the Sydney Morning Herald’s last poll, Labor trailed the Liberal-National coalition by 57 per cent to 43 per cent and was facing the loss of up to half its seats. This led to the self-preservation instinct among Labor backbenchers finally kicking in, and the resulting push against Gillard. But most Labor MPs were hoping that Rudd, at best, could save some of the furniture. Now there’s a 50:50 chance the house could be saved.

So how have Labor’s polling numbers turned around so quickly? The first reason is the government has a good story to tell, but Gillard was so widely disliked that people had stopped listening. Under Rudd, some of Labor’s achievements are belatedly being recognised.

Abbott is still talking about what he calls Labor’s “debt and deficit” problem, but the truth is that Australia’s public debt is 11.5 per cent of gross domestic product. This is one of the lowest debt levels in the world, and the main reason why Australia has a AAA credit rating from all three key ratings agencies.

Abbott had much success portraying Labor under Gillard as a modern-day kakistocracy (government by the worst of people). He was helped by the electorate’s deep dislike of Gillard, partly due to what they perceived as her having knifed Rudd in the back to become prime minister three years ago.

They also never forgave her for introducing a carbon tax when she had gone to the 2010 election saying she would not do so. (Rudd plans to move from a fixed to a floating carbon price next year.)

Rudd’s lead
But the coalition’s poll ascendancy hid the fact Abbott was almost as unpopular as Gillard. That has changed with Rudd succeeding her. The latest poll shows the prime minister with an approval rating of 51 per cent, against Abbott’s disapproval rating of 56 per cent. As for preferred prime minister, Rudd’s lead is 55 per cent to 41 per cent. Labor’s recovery has been most pronounced in Rudd’s home state of Queensland. They are a parochial lot in the “deep north” and could return six lost seats to Labor .

Though Gillard announced in February that the federal election would be held on September 14th, Rudd is under no obligation to stick to that date. Abbott is trying to goad him into holding it sooner. Given the polling numbers, he should be careful for what he wishes.