Policemen arrested after gang rape and death of Indian girls 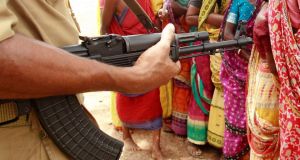 Villagers allege that local police were shielding the attackers as they refused to take action when the girls were first reported missing. Photograph: Reuters

Police in northern India have arrested three men, including two police officers, and are searching for at least four more after two teenage girls were found hanged from the branches of a mango tree after being gang-raped.

A postmortem indicated that the cousins, aged 14 and 15, hanged themselves after being repeatedly assaulted by a group of men in their village, in the Budaun district of the huge, poverty-stricken state of Uttar Pradesh.

The social stigma attached to being a rape victim in conservative India frequently leads to suicides. Earlier reports suggested the victims were strangled.

The incident provoked angry demonstrations locally and outrage elsewhere in the country. “It is a gruesome, barbaric act. The whole nation has been up against this, but every day there is this kind of problem,” said Ranjana Kumari, director of the Centre for Social Research and a women’s rights activist.

Around half of India’s 1.25 billion inhabitants do not have access to a toilet. Women are vulnerable to assault because they use fields around villages instead.

Family members named two policemen who they said had taken part in the assault and accused others of refusing to take action when they complained of repeated harassment of the two teenagers. They also accused the head of the local police station of ignoring a complaint by the girls’ father on Tuesday night that they were missing. He has since been suspended.

That incident led to an unprecedented national debate and to calls for widespread changes in cultural attitudes as well as policing and legal reform. Records show rising incidences of rape in India. Activists say the true number of assaults is higher than suggested by official records because of an entrenched culture of tolerance for sexual violence, which leads many cases to go unreported, and the social stigma which victims suffer.

Last month, the head of Uttar Pradesh’s governing party told an election rally that he opposed the law calling for gang- rapists to be executed. “Boys will be boys. They make mistakes,” said Mulayam Singh Yadav, who is also the father of the state’s chief minister. – (Guardian service)