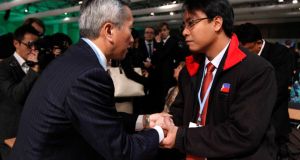 Representative of the Japanese delegation Hiroshi Minami (left) expresses his sympathy to Naderev Sano, a representative of the Philippines, before the opening ceremony of the 19th conference of the United Nations convention on climate change in Warsaw yesterday. Photograph: Kacper Pempel/Reuters

Philippine climate envoy Naderev ‘Yeb’ Sano yesterday challenged anyone who “continues to deny the reality that is climate change . . . to get off your ivory tower and away from the comfort of your armchair . . . and pay a visit to the Philippines right now”.

In an emotional address at the opening session of the UN’s 19th climate change conference in Warsaw, Mr Sano, a well-known figure in the negotiations, appealed to delegates from 190 countries to “stop this madness”.

In the wake of “colossal” devastation caused by Super Typhoon Haiyan, he said: “I speak for my delegation. But more than that, I speak for the countless people who will no longer be able to speak for themselves after perishing from the storm.”

Noting that it had hit his family’s home town, Mr Sano said: “I struggle to find words to describe how I feel about the losses and damages we have suffered from this cataclysm. Up to this hour, I agonise while waiting for word as to the fate of my very own relatives.”

The Philippines envoy made a similar plea at last year’s UN climate summit in Doha, Qatar, when his country was hit by Typhoon Bopha, then “the costliest disaster in Philippine history”. Little did they imagine that a much bigger “hellstorm” would come just 11 month later.

Winds from Haiyan were estimated to have been 314km per hour or more when it made landfall on the Philippine island of Samar. This would make it the strongest storm on record worldwide, exceeding hurricane Camille, which hit Mississippi in the US in 1969. “What my country is going through as a result of this extreme climate event is madness,” Mr Sano told delegates, many of whom were in tears as they listened to him. “The climate crisis is madness. We can stop this madness. Right here in Warsaw.”

‘Take action’
Appealing to developed countries to take the lead by cutting their greenhouse gas emissions, he said: “We cannot sit and stay helpless staring at this international climate stalemate. It is now time to take action. We need an emergency climate pathway.”

He said: “Evidence is accumulating weekly, monthly as to how dangerous this will be. So there is a huge urgency that we get on with this.”

Martin Kaiser, the head of the Greenpeace delegation, said scientists had warned that extreme weather events would increase “if we continue burning fossil fuels such as coal and oil. This conference should carve a path towards abandoning dirty fossil fuels”.

The 12-day UN conference, which follows publication of the UN Intergovernmental Panel on Climate Change’s latest assessment, is intended to lay the groundwork for an international agreement, due to be concluded in Paris before the end of 2015.

The IPCC said it was now nearly certain that humans are warming the planet, mainly through carbon emissions from the burning of oil, coal and gas, and warned that the Arctic Ocean could be nearly ice-free in summertime before 2050 based on current trends.