More than 100 dead in India after fire at fireworks display 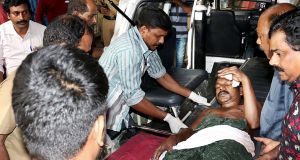 An injured man after an explosion and fire at the Puttingal temple in the Kollam district of the southern Indian state of Kerala on Sunday. Photograph: Getty/AFP

More than 100 people died and some 300 were injured in Indian’s southern Kerala state on Sunday, in a fire during a fireworks display at a Hindu temple.

Officials said the death toll could rise, as many of the injured in the fire at the Puttingal temple in the Kollam district, 70km from the state capital Thiruvananthapuram, had suffered third-degree burns.

Officials said the district authorities had denied the temple permission to hold the fireworks display to celebrate the seventh and last day of a festival honouring the Hindu goddess Bhadrakali. They were fearful that such a demonstration could result in disaster, as competing groups vie to hold bigger and better fireworks displays, with judges to determine the winners.

The fire started when a cracker fell on a stash of fireworks lying near the Puttingal temple at about 3am, triggering an explosion and flames that engulfed thousands gathered nearby.

The explosion also blew the roof off the temple’s administrative block, resulting in another building collapsing on spectators, killing many.

Many others were trampled to death or suffocated as thousands tried to flee through narrow passageways leading to and from the temple.

Television news channels showed plumes of white smoke billowing from the explosion site, as fireworks continued to explode into the sky.

“It was total bedlam,”said Krishan Das, an eyewitness. People were screaming in the dark with no one knowing how to make their way out to safety.

Anita Prakash, another local, said body parts were strewn over a wide area and that a majority of the bodies recovered were charred beyond recognition. Thousands of anxious and tearful relatives flocked to the temple complex in search of loved ones.

“The fire at the Kollam temple is heartrending and shocking beyond words,” tweeted prime minister Narendra Modi, who rushed to the disaster site with a team of doctors.

Opposition members, however, criticised Mr Modi for going to Kerala as the state is in the middle of voting in a bitterly contested provincial election, in which his Hindu nationalist Bharatiya Janata Party is participating.

Meanwhile, Kerala’s chief minister, Oommen Chandy, has appointed a retired judge to investigate the incident, declaring that “strict action” would be taken against those who had flouted rules. But many across Kerala were sceptical over the inquiry outcome, as numerous previous investigations into similar incidents had come to nought.

The tragedy was the latest in a series of fires and stampedes at religious festivals across India, where massive crowds gather.

Last year, 27 Hindu pilgrims died in a stampede on the banks of a holy river in southern India, while the year before 32 others were crushed to death at a religious festival in the east, after rumours that a fire had broken out.