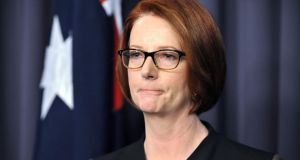 ‘I think what’s underlain [sic] Labor’s problems is not basically issues of personality. The issues of personality are a product of the disconnection of the Labor Party from its traditional base. And that’s a process that’s been going on for some decades, and it’s gone a very long way.”

Not, as you might suppose, one of this country’s seasoned Labour Party watchers, who had a busy time of it last week what with party chairman Colm Keaveney resigning from his post as full-time thorn in the side and a whole lot else. That quote is taken from an interview with Rick Kuhn, professor of politics at Australian National University, cited in the New York Times. Prof Kuhn was talking about the resignation of Australia’s prime minister, Julia Gillard, after she had been ousted as Labor Party leader by her old mate (just kidding) Kevin Rudd. She had come to power in 2010 by ousting him when she was his deputy prime minister.

Before we turn to the stinking, rotten, puerile misogyny which Gillard endured during her tenure as prime minister, it’s worth looking at the next sentence from Prof Kuhn. He’s talking about the problems of Labour in the modern world. He is talking, as we all are, in a political landscape free not just of ideology but of ideas.

“The shift has come under Rudd and gone further under Gillard and that has meant that the main focus has been on whose face attracts the most attention rather than policies that really intersect with the people who’ve provided the bulk of Labor’s support really since the 1890s.”

Gender as flaw
This is the unexplored issue behind the end of Gillard’s career (she has said that she is resigning from politics and who can blame her?): our political system doesn’t provide debate any more, only abuse. In the absence of conviction, the targeted politician is attacked for what are perceived to be weaknesses. In Australia it is regarded as a weakness to be female.

And we need not be too smug about this. It looks like the next leader of our own Labour Party could be female – God willing and with a following wind – and Joan Burton has already been subjected to the sort of criticism and sneering no male politician here has had to endure.

Gillard herself is a cool customer. She’s a lawyer, but otherwise seems pretty sound. Her head of communications, John McTernan, who went to work for her having previously been a senior adviser to Tony Blair, Gordon Brown and Harriet Harman (I know, I know) wrote last Saturday of how “her sense of self, of calm, was never rocked or rattled”.

The only time her voice wavered was when she declared how she was confident she had made things easier for Australia’s next female politicians.

In fact, McTernan himself has questions to answer, because the public relations around the Gillard premiership seem to have been a disaster: a hung parliament with triumphs buried or overtaken, the botched introduction of a hated carbon tax and other defeats magnified and let fester.

However, with the common-or-garden political mistakes and the self-inflicted injuries acknowledged, the misogyny is shocking. McTernan himself, no political shrinking violet, has said, “Gillard has faced serial abuse as a woman on a scale I believe is unprecedented in modern politics . . . That negative, corrosive, anti-woman rhetoric that Gillard endured for so long has damaged Australian politics, and public opinion.”

We might worry that Ireland exported some its cruelty and capacity for hate to Australia, but it does seem to have developed a whole new strain. For the most part, our misogynists still have to work in private – and frequently at their laptops, poor things – but in Australia they can operate in the open. Thus Dan Farley, head of a major agricultural company, could last year call his prime minister “a non-productive old cow”.

‘Bitch’ and ‘witch’
Thus Tony Abbott, the leader of the Liberal-National coalition, and probably Australia’s next prime minister when Labor loses the federal elections this autumn, could be photographed in front of banners calling Gillard a bitch and a witch.

It was such an open season on the prime minister that, when her father died, a radio commentator said he had “died of shame”. Last week was short of comforts here but it is hard to think of any circumstances in which that remark would be tolerated about a bereaved public figure.

As it was, Gillard would probably have been better off showing anger more often. Her brilliant anti-misogyny speech delivered against Tony Abbott in the Australian parliament last October – her notes consisted of just four bullet points, McTernan tells us – famously went viral and was seen by two million people. What Gillard had to put up with was a disgrace to her country. We can learn from it.