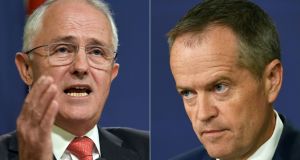 After a phony campaign that began in March, Australia’s election proper started on Sunday when prime minister Malcolm Turnbull confirmed the country will go to the polls on July 2nd.

In a country where economic policies are often copied from opposition to government and vice-versa, this election offers voters a real choice between the ruling conservative Liberal-National coalition, and the Labor Party.

“At this election, Australians will have a very clear choice – to keep the course, maintain the commitment to our national economic plan for growth and jobs, or go back to Labor, with its high-taxing, higher spending, debt and deficit agenda, which will stop our nation’s transition to the new economy dead in its tracks,” Mr Turnbull said.

Labor leader Bill Shorten said he would “make Australia a fairer place” if elected. “This election is much more than a choice between parties and personalities, this election is about a choice about what sort of Australia do we want to live in.”

While Mr Turnbull stuck mainly to economic matters in launching his campaign for re-election, Mr Shorten also spoke about education, health and climate change. “[Mr Turnbull] famously said that he did not want to lead a party that was not interested in climate change. Now he has brushed climate change out of his presentation altogether,” Mr Shorten said.

The prime minister said voters face a straight choice. “Do we stay the distance with our national economic plan for jobs and growth? Or do we go back to Labor, which has no plan, only politics?” Mr Turnbull said.

The eight-week campaign will be the longest since 1969 and the first in which every seat in both houses of parliament is being voted for since 1987.

In a normal federal election all 150 lower house seats become vacant, but only half of the 76 senate seats do. But in this rarely used type of election, known as a double-dissolution, all of the senate becomes vacant. The double-dissolution was triggered by the senate – where the government relied on minor parties to pass its bills – twice rejecting legislation.

When Mr Turnbull deposed his predecessor Tony Abbott in an internal Liberal party coup last September, the coalition’s polling numbers recovered and they looked set to be returned easily. But Mr Turnbull changed almost none of the policies that caused him to challenge Mr Abbott, and recent polls have put Labor neck and neck with the coalition, or slightly ahead.

But the coalition holds 90 lower house seats to Labor’s 55, and Mr Turnbull has a far higher personal approval rating than Mr Shorten:54 to 27. While Labor is likely to win back some seats in the most populous states of New South Wales and Queensland, it needs a uniform swing of four per cent to regain power.

History is on the coalition’s side, though. The last time an Australian government lost power after one term was 1931.