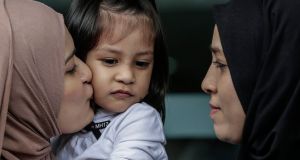 Two years after Malaysia Airlines flight MH17 was shot down over eastern Ukraine, with the loss of 298 passengers and crew, the airline has settled damages with the families of most of those who died.

The settlements – whose details have not been revealed – were confirmed by Veeru Mewa, a lawyer representing 76 of the 196 Dutch passengers who died when the jet was hit by a Russian-made Buk surface-to-air missile while en route from Schiphol airport in Amsterdam to Kuala Lumpur.

Under the Montreal Convention, which sets out the legal liability of international carriers, Sunday was the deadline for the instigation of new legal actions – as well as the second anniversary of the incident, which was marked in all 10 of the countries who lost citizens.

Mr Mewa of Beer Advocaten in Amsterdam said talks were ongoing between the airline and relatives who had not yet negotiated an agreement.

The settlement was also confirmed in London by aviation specialist James Healy-Pratt, whose firm Stewarts Law represents some 30 MH17 families and has also been involved in legal actions arising from the MH370 and EgyptAir flight MS804 disasters.

He said that, overall, around 85 per cent of the claims had been settled “on confidential terms”, while six lawsuits remained before the Malaysian high court in Kuala Lumpur.

Having admitted last year that it was “technically bankrupt” as a result of the MH17 and MH370 crashes and other market difficulties, Malaysia Airlines Berhad chief executive Christoph Mueller announced its first monthly profit in years last February – and says it aims to break even in 2018.

While the details of the MH17 settlements remain confidential, under the Montreal Convention airlines must pay damages of at least €130,000 to the families of those who die in airline disasters, regardless of the circumstances in which they occur.

Some of the relatives, however, are not satisfied with taking action only against the airline – or with relatively limited compensation.

Malaysia’s transport minister Liow Tiong Lai revealed at the weekend that preliminary conclusions of the long-awaited five-country forensic investigation into the crash are expected to be published before the end of this year.