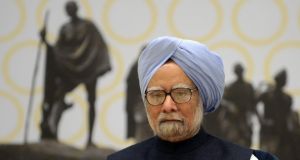 Two leading Indian television news channels, supported by social and print media, have launched a campaign against the country’s oppressive “VIP culture” that confers incredible privileges on politicians, civil servants and other influential persons and their families.

Times Now and New Delhi Television frequently broadcast appalling examples of traffic being held up across India, often for hours at a stretch, to facilitate the travel of these VIPs on the specious grounds of ensuring their security.

Travelling in lengthy motorcades – India’s president Pranab Mukherjee has a minimum of 17 vehicles in his entourage – all such VIPs are surrounded by a phalanx of trigger-happy commandoes in full battle gear, further enforcing their exclusivity.

Over decades, these armed guards and processions have become a symbol of power and importance to which a majority of Indian public figures aspire, unmindful of the chaos it begets.

The traffic blockades that this VIP travel generates have led to the deaths of dozens of people in need of immediate medical attention. In July 2010, eight-year old Aman Khan, desperately needing medical attention, died in the industrial city of Kanpur in Uttar Pradesh province, 470km southeast of Delhi, after his parents got held up in traffic halted to allow former prime minister Manmohan Singh’s motorcade to pass.

Later that year, Anil Jain, a 48-year-old businessman who had suffered a massive heart attack, died in central Delhi when his ambulance was unable to get to hospital. It too was entrapped in traffic stopped to facilitate Singh’s visit to the area.

And in November 2009, a 32-year-old kidney patient died of respiratory failure because the entrance to a hospital in Chandigarh, 250km north of Delhi, was blocked for the prime minister’s convoy.

Numerous enraged relatives of people who died under similar circumstances in Bangalore, Bombay (Mumbai) and Chennai have expressed their outrage on the two campaigning television news channels and on social media.

Their collective fulminations are analogous: it’s time to end India’s obnoxious and murderous VIP ethos. India’s VIP culture, however, is not confined only to its roads. There is a privileged security drill for such elites at airports, railway stations and even tollbooths on highways. There are VIP entrances at temples and other public places, leading to elite enclosures at cricket matches and other sporting events, music, fashion and even art shows.

Entry to these is facilitated by exclusive tickets that come with VIP parking alongside access to spotless elite toilets. And if that were not enough, a host of prominent politicians, business tycoons and public figures are even accorded VIP treatment in jail.

Some of these “high-value” jailbirds are even provided armed guards in keeping with their status.

“Nothing in India is immune from the VIP effect,” says activist Seema Mustafa. It’s a country subsumed by a feudal VIP culture, one where its powerful elite increasingly enjoys privileges that others can only dream about, she added.

This was best illustrated on February 24th when former federal minister Renuka Chowdhary held up a commercial Air India flight to Hyderabad, southern India, for nearly an hour at New Delhi, as she was reportedly dallying at the airport shopping complex.

By the time she arrived at the boarding gate, the pilot had missed his place in the congested departure line on the runway. “What stopped them from leaving me and taking off?” asked an incensed Chowdhary, affronted at being blamed for the delay.

“Millions of Indian voters believed that prime minister Narendra Modi would vindicate his election campaign promises of ending VIP culture after he assumed office,” says Delhi fashion designer Rita Paul. But it has only got worse, she laments, with all the newly elected MPs demanding more concessions and perquisites to pamper their egos and flaunt their new status.

This overwhelming VIP culture prompted leading lawyer Harish Salve to file a public interest case in India’s supreme court in February, questioning the misuse of state machinery in blocking roads to give priority passage to VIPs.

In response, the court has ordered the federal government to provide details of such arrangements and the expenditure incurred in providing security to these elites.

Meanwhile, in early March the local authorities in Chandigarh inaugurated a smooth, tarred road for VIPs to the city’s busy railway station. Alongside it runs the potholed track for ordinary Indians, clogged with traffic and punctuated by road rage abuses.