Actor, Johnny Depp given two days to send his pet dogs back to the United States or have them euthanised for skipping Australian quarantine. Video: Reuters 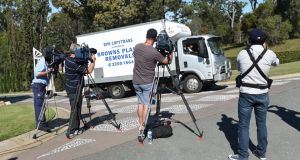 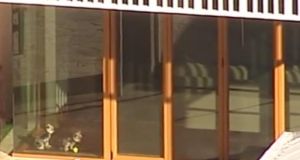 Johnny Depp’s two dogs are set to be euthanised at 10am Saturday (1am Irish time) unless they are removed from Australia.

The actor illegally brought his two dogs to Australia says agriculture minister Barnaby Joyce, and now they need to “bugger-off” to California or they’ll be put down.

Mr Joyce said the Hollywood hearthrob failed to declare his Yorkshire terriers to customs authorities when he and his wife, Amber Heard, returned to Queensland by private jet last month.

Depp is making Pirates of the Caribbean 5: Dead Men Tell No Tales on Queensland’s Gold Coast.

“It’s time that Pistol and Boo buggered-off back to the United States, ” Mr Joyce said at around 8am local time this morning (11pm Wednesday Irish time).

“He’s now got about 50 hours left to remove the dogs. He can put them on the same charter jet he flew out on and fly them back out of our nation.”

“We found out he snuck them in because we saw him taking them to a poodle groomer. Now Mr Depp has to either take his dogs back to California or we’re going to have to euthanise them,” he told ABC radio.

“Just because he’s Johnny Depp does not mean he’s exempt from Australian law. There is a process if you want to bring animals in, you get the permits, they go into quarantine and then you can have them.

“You start letting in movie stars, even though they have been the sexiest man alive twice, who come into our nation, why don’t we just break the laws for everybody.

“If dogs come in and they have rabies ... the whole life in Brisbane changes. They won’t be so sympathetic to Depp at that point in time,” he said.

“Think how close it is, it’s in Bali, just next door, it’s not fanciful stuff. Therefore, we are very diligent about what comes into our nation.”

Mr Joyce said the illegal alien dogs were discovered when they were taken to Gold Coast dog groomers Happy Dogz.

“He has decided to bring in to our nation two dogs without actually getting the proper certification and proper permits required. It basically looks like he snuck them in,” he said.

“In my view, he’s a great actor, Jack Sparrow, wonderful, but this is not an excuse for breaking our laws.

“We rely on people being honest ... most reasonable people say, ‘I do have a couple of dogs, I’d better put that on the piece of paper.’ “

The minimum quarantine period for animals entering Australia is 10 days but Mr Joyce said Depp has lost his chance.

“I’m dead against that idea and this idea that I break the law and then we go in another direction just because I’m a movie star; I don’t like that,” he said.

“If you want to obey the law, you have 10 days to quarantine.”