Japanese employees working themselves to death 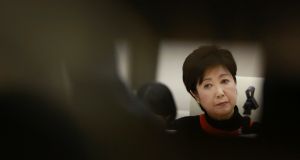 On late-night trains, Tokyo’s corporate army retreats for the day, carriage after carriage of rumpled salary-men clutching briefcases, tired heads bobbing to the rhythm of the long commute home.

The workaholic Japanese male is a well-established cliche for good reason: more than one in four Japanese companies admitted in a government survey this autumn that some workers clock in for 80 hours of overtime a month.

Over a million Japanese employees regularly put in at least 100 hours monthly overtime. A manager at a nuclear plant worked twice that amount before taking his own life in April this year.

Under new legislation, employers are supposed to monitor the 80-hour threshold, which is considered the point at which death from overwork – known as karoshi – becomes more likely.

In practice, however, overtime is often poorly documented or deliberately hidden, especially at media and service companies, the most sought-after employers by ambitious young graduates.

Matsuri Takahashi was just 24 when she took her own life in December 2015. She had joined Dentsu, Japan’s largest advertising firm the previous April, straight from the country’s top university.

Takahashi was soon putting in monthly overtime of over 100 hours. Before she died, she was getting just two hours sleep a night. On Christmas Day, she jumped from the roof of her company dormitory.

Takahashi left behind a digital trail, documenting on Twitter her growing despair. “My body and mind are totally worn out,” she tweeted at one point. “I just want to die,” she wrote about a month before her suicide.

“It’s a classic case of karoshi,” says Hiroshi Kawahito, a lawyer for Takahashi’s bereaved family. Young graduates full of vim are often quickly worn out by the demands of corporate life, he says, adding that Takahashi’s managers had instructed her to fake her time sheets to avoid triggering official attention.

“Japan’s culture of long hours developed in the postwar years, when the country was trying to match the economies of the West.” As rapid economic growth petered out in the 1990s, companies switched to survival mode instead of catch-up. The end result for employees is the same, he says.

Japan’s ministry of health released its first White Paper on karoshi prevention last month. In addition to revealing shockingly long working days, the paper links over 2,000 suicides a year to exhaustion or other work-related factors.

Decades after the problem began getting media attention in the 1980s, the government finally legislated in 2014 to reduce karoshi cases. A few days after the legislation came into effect, a restaurant chain was ordered to pay compensation to the family of Mina Mori, who was also 24 when she hanged herself after working an average of 140 hours overtime per month.

The Dentsu case shows that nothing appears to have changed since then, laments Mori’s mother, Yuko. “There’s more attention being paid to the problem but it seems to me that the corporate ethos that allows such things to happen is the same.”

Still, the Tokyo labour standard inspection office ruled on September 30th that Takashi has been driven to suicide by the demands of her job. In the glare of bad publicity that followed, Dentsu has introduced an overtime cap of 65 hours a month. About 50 other companies have pledged to reduce working hours. Dentsu was raided on Monday by government officials investigating possible breaches of the labour standards law.

Yet, transforming decades-old corporate practices will not be easy, warns Atsuko Kanai, a specialist on karoshi at Nagoya University. The labour ministry says 4.74 million Japanese employees put in more than 60 hours a week, and middle-aged men often toil the hardest of all.

In managerial positions, these men, who are not subject to legal restrictions on overtime, set the tone at many companies, says Kanai. “They think, ‘Well, I’m working hard so why don’t you?’” Young people are keen to please and don’t know how to say no when they join so they’re very vulnerable, she says.

Like many who study the problem, she wants tougher laws to force companies to shut loopholes that allow them to exploit staff. Dentsu, a company that epitomises Japan’s gruelling work ethic, might be one place to start. During the hardscrabble postwar years, its president wrote a now famous “10 rules of work”, exhorting employees to ever-greater feats. Among the rules: “Never give up, even if you might be killed.”