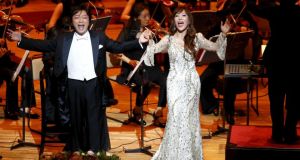 South Korea and Japan marked the 50th anniversary of diplomatic ties on Monday with a push to mend relations strained by feuds over the legacy of Japan’s wartime past.

The two governments are also working towards their first leaders’ meeting in three years, hoping to move past tension that has complicated efforts to improve security co-operation in the face of an unpredictable North Korea and an assertive China.

Until Sunday, the two leaders had been expected only to send messages.

“Let us build a new era for our two countries together, while looking back at the 50 years of history of friendship and development and looking forward at the next 50 years,” Mr Abe said at the reception, where guests were serenaded with traditional Japanese and Korean music.

“For that, I would like to join forces with president Park Geun-hye and work together.”

“As we seek to do so,” he said, “what is important is to ensure that circumstances are put in place that allow us to free ourselves of the heavy burden of history, our single greatest impediment, in the spirit of reconciliation and harmony.”

Feuds over wartime history, as well as a row over tiny islands claimed by both countries, still fester.

South Korea says Japan has not atoned properly for its second World War conduct, including its role in forcing women, many of them Korean, into prostitution in military brothels.

On Monday, descendants of Koreans conscripted into the Japanese imperial army or recruited for forced labour under Japanese colonial rule protested outside the Japanese embassy in Seoul, demanding compensation and recognition.

In Tokyo, right-wing Japanese activists in trucks with loudspeakers circled the Korea Centre amid heavy policing, shouting slogans such as “Cut ties with South Korea.”