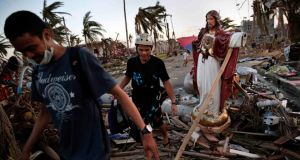 Residents walk past a statue of Jesus Christ in the rubble of a neighbourhood in Tacloban that was devastated by Typhoon Haiyan. Photograph: Kevin Frayer/Getty Images

The head of Irish aid agency Goal has branded the international response to the Typhoon Haiyan disaster in the Philippines as “ completely inadequate”.

Mr Andrews noted the UN said yesterday only 19 per cent of its call for funding had been met by international governments.

“The situation on the ground in the Philippines is almost beyond description,” he said. “The UN made a call for funding in the amount of €300m and to date a fraction of that has been met. The failure to meet that funding is a disgrace.”

He called on the international community to provide cash and clear commitments to help the tens of thousands of people in dire need of assistance following last week’s disaster.

Mr Andrews also said the Irish Government can take a leadership position on this issue, “as we have done so many times in the past”.

The UN was less scathing in its comments on the international reaction today, with one senior official saying many countries had come forward to help.

“The response from the international community has not been overwhelming compared to the magnitude of the disaster, but it has been very generous so far,” Jens Laerke of the Office for the Coordination of Humanitarian Affairs told the Geneva news briefing today.

Meanwhile, l ong-delayed emergency supplies flowed into the typhoon-ravaged central Philippines today, reaching desperate families who had to fend for themselves for days, as the United Nations more than doubled its estimate of homeless to nearly two million.

The aid effort was still patchy, with relief officials reporting a surge in desperate, hungry survivors trying to leave the coastal city of Ormoc, 105km west of Tacloban, the worst-affected major city.

More than a week after Typhoon Haiyan killed at least 3,633 with tree-snapping winds and tsunami-like waves, hundreds of international aid workers set up makeshift hospitals and trucked in supplies.

Helicopters from a US aircraft carrier ferried medicine and water to remote, battered areas. Residents of Tanauan, a fishing town about 15km southeast of Tacloban, said they only started receiving substantial aid yesterday after being forced to survive on biscuits and dispose of dead bodies on their own for days.

More than 60 people were buried behind the municipal office in the district of 50,000 people. Down the road, dozens of corpses were interred under a roundabout.

“I think (the response) was quite slow. This town was isolated. Media didn’t come here. We were out of circulation for three days,” said Penny Tecson, the wife of the district’s mayor. She was running the recovery operation while her husband, Pel Tecson, was in Tacloban to coordinate the district’s first large-scale delivery of aid from the national government.

In one ward of Tanauan, neighbourhood chief Cecilio Yepes Jr estimated his community lost nearly 10 per cent of its 1,176 residents. The storm surge has transformed an entire swampy plain in the neighbourhood into a rubbish pile of trees and debris. Locals have recovered and buried 30 bodies. Another 98 remain somewhere in the vast wasteland that stretches on either side of the road.

At least 800 people died in the district of Palo, which lies between Tanauan and Tacloban, national authorities said. In Tacloban, work crews and heavy equipment cleared debris from roadsides, but side streets remained piled with the sodden, tangled remains of homes which city officials fear could reveal hundreds more bodies when they are eventually cleared. There are 1,179 people missing, according to the national count.

The official death toll only rose by 12 today, giving hope that initial local estimates of 10,000 dead were overblown.

In front of Tacloban’s San Fernando Elementary School, government workers distributed sacks of aid to a restless crowd of hundreds who had spent the last week camped in shattered wooden classrooms or in a main school building with floors covered in wet black sand.

Nearby, about a dozen body bags were neatly lined up by the roadside. Rica Mobilla, an 18-year-old mother of one, said local authorities showed up two days after the disaster, handing out four kilograms of rice and a few packs of noodles for her family of thirteen. The family stretched this out with onions and garlic bought from the market. “I’m upset. I’m not blaming anyone. If there’s aid there to give out we’ll receive it,” she said.

President Benigno Aquino, caught off guard by the scale of the disaster, is scheduled to visit typhoon-affected areas tomorrow. He has been criticised for the slow pace of aid distribution and unclear estimates of casualties, especially in Tacloban, capital of hardest-hit Leyte province.

In Tacloban the death toll is written on a whiteboard at City Hall and bodies have been buried in mass graves since Thursday. Tacloban mayor Alfred Romualdez said many people may have been swept out to sea after the tsunami-like wall of seawater slammed into coastal areas.

The Philippines Social Welfare and Development Secretary Corazon Soliman acknowledged in a radio interview that the national relief response had been too slow to reach many areas. “We will double our efforts to distribute relief goods because we’ve been hearing complaints that a lot of people have yet to receive relief goods,” she said.

Arnaldo Arcadio, an emergency responder with the Catholic Relief Services group, said desperation over conditions in remote rural areas had led people to surge into Ormoc in hope of fleeing the city by ferry. “People are fleeing in mass numbers and coming to Ormoc, where they stand in line all day to get on a ferry only to be turned away,” he said. “Ormoc is teeming with people who haven’t eaten in days. They’re hungry, thirsty and tired. They want to get out.”

Across Tacloban, survivors have begun to rebuild. The sounds of hammers ring out. Men gather in groups to fix motorbikes or drag debris off splintered homes and wrecked streets. Most have given up searching for lost loved ones. The number of people made homeless by the storm rose to 1.9 million, up from 900,000, the United Nations’ humanitarian agency said. In Tacloban, at least 56,000 people face unsanitary conditions, according to the United

Japan plans to send 1,180 troops to the Philippines, its largest oversea deployment for disaster relief. Japanese destroyer Ise and transport vessel Osumi will leave for the Philippines in a few days carrying helicopters to deliver aid.

But the patchy initial aid response highlighted the need for international agencies and local governments to prepare for more frequent, more devastating natural disasters, said Kristalina Georgieva, European Commissioner for International Cooperation, Humanitarian Aid and Crisis Response. “This is a mindset change that must happen if we want to be able to stand up to this trend,” she said in Tacloban.

US military assistance has been pouring into the Philippines since Thursday when the USS George Washington aircraft carrier and accompanying ships arrived off eastern Samar province, carrying 5,000 crew and more than 80 aircraft.

The Philippines is one of Washington’s closest allies in Asia and a crucial partner in President Barack Obama’s strategy of rebalancing US military forces towards the region to counter the rising clout of China.

The Pentagon said yesterday US Navy amphibious ships will leave Okinawa in Japan “in the coming hours” carrying an additional 1,000 marines and sailors who will provide engineering equipment, relief supplies, and medical support. The US military estimates that it delivered some 283,000kg of relief supplies to the Philippines so far. The American military also estimated that it had moved nearly 1,200 relief workers into Tacloban and airlifted nearly 2,900 displaced people from affected areas so far.

Donations can be made to the Goal response in the Philippines by telephoning 01 280 9779, visiting goal.ie or following Goal on Facebook at facebook.com/goalireland.