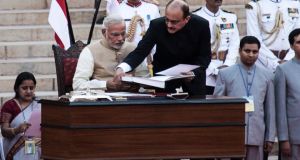 India’s new prime minister Narendra Modi, seated, prepares to sign a register during a swearing in ceremony for him and other members of the cabinet at the presidential palace in New Delhi last week. One of Mr Modi’s senior ministers, Gopinath Munde, was killed in a car crash in New Delhi today. Photograph: Udit Kulshrestha/Bloomberg.

Mr Munde was injured while driving to the capital’s airport and died later in hospital.

“An accident took place earlier in the morning, following which he was taken to the Safdarjung Hospital in Delhi. Doctors declared him dead at about 8 am,” transport minister Nitin Gadkari told reporters.

Mr Munde (64) was conscious and able to talk to his bodyguard after the accident. He died in hospital from cardiac arrest, Mr Gadkari added.

“Condolences to Munde’s family. We stand by them in this hour of grief,” Mr Modi said in a tweet. “My tributes to a dynamic leader whose premature demise leaves a void hard to fill.”

Gopinath was deputy chief minister in the western state of Maharashtra from 1995 to 1999 and elected twice to India’s lower house of parliament, in 2009 and 2014. He had served as deputy leader of Mr Modi’s Bharatiya Janata Party (BJP) in parliament.

The position of rural development is a crucial one in Mr Modi’s government, which faces a huge challenge to tackle rural poverty.

More than half the population lives in the countryside but generates just 14 per cent of gross domestic product.

Mr Modi won a landslide victory in last month’s general election, ending a decade of rule by the Congress party that has dominated Indian politics since independence.