Many people may still be buried below the debris, the police commissioner says 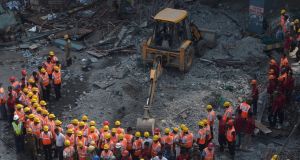 Indian rescue workers clear away debris in an efforts to free people trapped under the wreckage of a collapsed flyover in Kolkata. Photograph: AFP/Getty

The death toll in the collapse of a flyover under construction in the Indian city of Kolkata rose to 23 on Friday, after rescuers worked through the night with cranes and jackhammers to clear huge slabs of steel and concrete.

Ninety people were saved after a 100m length of the flyover broke off at one end, and slammed into pedestrians and vehicles below on a road through a busy commercial district near Girish Park in the eastern city.

“Many of the people rescued have been seriously injured,” police commissioner Ajay Tyagi said.

“Many could still be buried below the debris.”

Television channels broadcast images of a street scene with two autorickshaws and a crowd of people suddenly obliterated by a mass of falling concrete that narrowly missed cars crawling in a traffic jam.

Chief minister Mamata Banerjee, whose centre-left party is seeking re-election in the state of West Bengal next month, rushed to the scene on Thursday.

Ms Banerjee (61), said those responsible for the disaster would not be spared and blamed the previous state government that had awarded the flyover contract in 2007.

Yet she herself faces questions about a construction project that has been plagued by delays and safety fears under her rule.

A newspaper reported last November that Ms Banerjee wanted the flyover - already five years overdue - to be completed by February.

Project engineers expressed concerns over whether this would be possible, the Telegraph newspaper said at the time.

The disaster could play a role in the West Bengal election, one of five being held this month that will give an interim verdict on prime minister Narendra Modi’s nearly two years in power.

Indian company IVRCL was building the 2km Vivekananda Road flyover, according to its web site. Its shares closed down 5 per cent on Thursday.

A senior IVRCL manager has drawn national condemnation for calling the disaster an “act of God”.

“We did not use any inferior quality material and we will cooperate with the investigators,” director of operations, AGK Murthy said on Thursday in Hyderabad where the firm is based. “We are in a state of shock.”

Rescue operations were slow to get under way at first, with nearby residents forming crowds several deep as they tried to help trapped people.

But three cranes working overnight managed to clear some of the wreckage and free access to vehicles with people still believed to be trapped inside.

News images from the scene were harrowing, with the leg and arm of one dead man protruding from under a massive steel girder.

Rescuers carried away an unconscious man by two arms and one leg as the other leg, clearly broken, flapped uselessly.

Getting survivors to hospital was complicated by the lack of access for ambulances to the flyover, which is crowded by buildings on either side.

“Every night, hundreds of labourers would build the flyover and they would cook and sleep near the site by day,” said Ravindra Kumar Gupta, a grocer, who pulled out six bodies, together with his friends.

“The government wanted to complete the flyover before the elections and the labourers were working on a tight deadline ... Maybe the hasty construction led to the collapse.”