Help pours in to Kathmandu but risk of disease increases

Aid workers land in Nepal, but fears grow that death poll could exceed 10,000 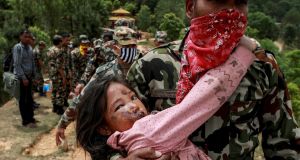 An injured girl is carried by a Nepal Army personnel to a helicopter following Saturday’s earthquake. Photograph: Reuters/Danish Siddiqui

After several passes and nearly three full hours circling Tribhuvan International Airport, the Etihad flight finally touches down at the small Kathmandu airfield with its cargo of concerned relatives, emergency relief workers in jumpsuits and media.

Just days after a 7.8 magnitude earthquake, two previous daily flights have been sent back, and one woman sitting in the row beside us believes the plane won’t make it after repeat attempts. The pilot speaks of “negotiations” and the plane does rise again after earlier promising a descent, but eventually wheels are down – presumably a deal-breaker – and we land at the small airfield.

This is the worst earthquake in more than eight decades and everyone is worried about the fate of people in outlying regions. People are still being pulled from the rubble more than 50 hours after the tragedy, but those numbers are going to slow dramatically soon, as time takes its toll, and this is a fearful prospect.

Prime minister Sushil Koira said the death toll was heading towards 10,000 and the country was on a “war footing”.

“It is a challenge and a very difficult hour for Nepal,” he told Reuters.

There are fears that a worsening sanitation crisis and looming monsoons could worsen the situation.

At the baggage claim area, Muslims for Humanity is unloading a stack of crutches, while the Salvation Army and other international agencies are also there. It’s like a regular luggage reclaim area, but the bags contain kilos of sugar, medical supplies, essential items for the devastated parts of Nepal.

Oxfam Ireland is meeting its staff on the ground, and is sending out assessment teams to come up with a response plan.

Saturday’s earthquake and subsequent aftershocks cut off Nepal’s electricity and water supplies, resulting in little access to clean water, which are areas of expertise for Oxfam.

“We have a local team who speak the language, know the geography. The big thing right now is information gathering and finding out what routes are open,” said Colm Byrne, humanitarian manager at Oxfam Ireland.

Irish aid workers have been quick to respond to the crisis. Goal is here, as is Plan and other Irish agencies.

There are military planes from Australia and the US on the runway and soldiers from many countries in evidence.

This is not like the earthquake in China, where foreign troops had to keep a low profile. As we queue for visas, we see a big El-Al aircraft, and uniformed Israeli soldiers walk back and forth through the immigration area. Israel’s defence forces have a major reputation in disaster relief.

Passing through immigration, there are signs for Everest Bank. Mount Everest, the world’s tallest mountain, is a major tourist draw in Nepal, but it too has been devastated. A huge avalanche on the mountain killed at least 17 climbers and guides, including four foreigners, the worst single disaster on the peak, but all of those climbers who had been stranded at camps high up on Everest had been flown by helicopters to safety.

The WHO said it believes only 27 per cent of the population has access to adequate sanitation, adding that diarrheal diseases, dysentery, cholera and typhoid are the primary causes of death in the country.