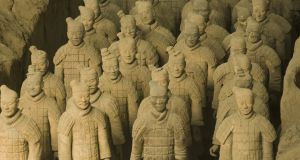 Chinese police have destroyed an army of fake terracotta warriors in northern China at a copycat resort near the mausoleum housing the ancient sculptures depicting the armies of Qinshihuang, China’s first emperor.

Authorities in Xi’an in Shaanxi Province raided a fake resort in Lintong, where the real terracotta warriors are also located, and destroyed over 40 copycat sculptures.

The fake statues were found at the Suyuanqinhuangling resort, which covers over 600 square metres, the Xinhua news agency reported.

Unlicensed guides and taxi drivers working on commission would lure unsuspecting tourists to the site, “confusing visitors and damaging tourism in the district,” a local official told Xinhua.

The raid by police and local tourism officials took place after an online complaint.

The Terracotta Army is a vast collection in three pits of over 8,000 pale-coloured, heavily armoured sculpted warriors, complete with 130 chariots with 520 horses and a further 150 cavalry horses, who archaeologists believe were built to guard Emperor Qinshihuang in the afterlife.

The warriors each have individual features and stand in different positions, with their hair tied up in specific ways to mark out their rank. They also vary in height according to their status, with the tallest soldiers being the generals.

Other non-army figures were found in the pits, including bureaucrats, acrobats and musicians.

They were discovered by accident by farmers in Lintong in 1974, and are displayed in lines inside the aircraft hangar-like museum in Xi’an.

The weapons are real, not replicas, and are coated with chromium to protect against rust. Some historians believe the site could have been a military school, not a crypt.

Qinshihuang founded the Qin Dynasty (221-206 BCE) and began more than 2,000 years of imperial rule in China.

There are plenty of replica terracotta figurines for sale around the site, including life-size figures of David Beckham in imperial armour.