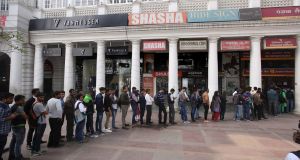 Countries such as Russia, Indonesia and the Central Asian republics have indicated that they plan to impose weekly cash limits of 50,000 rupees (€689) on Indian missions, equalling the amount they are officially permitted to withdraw under India’s demonetisation regulations, which began on November 8th.

Prime minister Narendra Modi imposed a ban on all 500 rupee and 1,000 rupee notes – totalling 86 per cent of all currency in circulation in India – in a bid to counter tax evaders, counterfeiters, drug traffickers and money launderers. There have been chaotic scenes at banks in the country since.

“With so little cash you can’t have a decent dinner, forget running regular diplomatic business,” Russia’s ambassador Alexander Kadakin wrote in a strongly worded letter to India’s foreign ministry on December 2nd. “Such an amount is totally inadequate as regards the embassy’s salary and operational expenditure requirements.” Diplomatic sources said the mandatory 50,000 rupees a week averaged 250 rupees (€3.44) a head for the mission’s 200-odd diplomats and local staff.

The limit also threatens to jeopardise Indonesian president Joko Widodo’s visit to India next week, as the country’s embassy does not have enough cash to make arrangements for the trip. The cash crunch also forced the Kazakh embassy to curtail its 25th Independence Day celebrations last week, as it struggled to pay for an orchestra specially imported from Astana for the event.

Several European embassies, and those from Ethiopia, Kazakhstan and Sudan, had warned India’s foreign ministry of reciprocal monetary consequences.

The Irish Embassy, however, said it was managing to cope with the financial limitations imposed by the demonetisation drive. “We are not facing many problems,” said Irish ambassador Brian McElduff, but he did not elaborate.

Earlier this week, Frank Hans Castellanos, the Dominican Republic ambassador in Delhi and the dean of the diplomatic corps in India, met foreign ministry officials to highlight cash flow problems faced by more than 150 embassies. India’s foreign office spokesman, Vikas Swarup, said that diplomatic missions had informed his ministry that they needed more funds, but he offered no solution.

Meanwhile, the enduring misery and trauma for tens of millions of Indians continues unabated, as banks run short of cash within a couple of hours of opening every day, leading to unruly scenes. Large numbers of daily wage workers have been laid off as their employers simply have no funds to pay them. Small businesses have also shut down. Officials estimate that it will take at least four to five months to remonetise the withdrawn money, worth more than €231 billion, as India’s four currency printing presses work overtime to cope with the shortfall.

Federal finance minister Arun Jaitley dismissed the widespread public ordeal as “transitory pain” and said Mr Modi had the “broad shoulders to face the consequences of demonetisation”. He added: “The transitory pain of demonetisation is regrettable, but the move will lead to better economic growth in the long run.”