Wave of killings since election win alarms rights groups, while US expresses concern 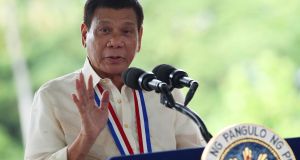 The number of drug-related killings in the Philippines since Rodrigo Duterte became president two months ago on a pledge to wipe out the illegal drug trade has reached about 2,000, according to data released today.

There has been popular support for his campaign, but the wave of killings unleashed since his election victory has alarmed rights groups and brought expressions of concern from the United States, a close ally of Manila.

As officials readied a publicity campaign to explain his fight against narcotics, the Philippine National Police said that close to 900 drug traffickers and users had been killed in police operations from July 1st to August 20th. That was an increase of 141 people over a week, on average 20 people a day.

Last week the police said 1,100 other drug-related killings that were not classified as police operations were also being investigated. No new number for that category was given today but, together with the new figure for police encounters, the total came to about 2,000.

Mr Duterte won the presidency of the Southeast Asian nation in a May election on a promise to wipe out drugs.

Two UN human rights experts recently urged the Philippines to stop extra-judicial killings, drawing a furious response from Mr Duterte, who threatened to pull his country out of the UN. His foreign minister later rowed back on the threat.

Mr Duterte’s communications secretary, Martin Andanar, said on Monday that a 30-second advertisement explaining the anti-drug campaign would be aired over the next week by commercial and public TV stations and in movie theatres.

“The government is not spending a single centavo on these ads and TV stations are carrying them for free,” Mr Andanar told reporters at an event in a Manila hotel.

He said his office would also publish a 40-page pamphlet to explain the rising body count. This would be issued on the president’s first trip abroad next week, first to Brunei and then to an East Asia summit in Laos.

“Some people abroad have to understand why many people are getting killed in the anti-drug campaign. They must understand, this is a war and there are casualties,” Mr Andanar said.

“The pamphlet will inform and explain that the government was not killing people at random, that these killings are not extrajudicial in nature but as part of the anti-crime campaign. Some of those killed were police officers who are involved in criminal activities.”

The White House said on Monday that US president Barack Obama is expected to meet Mr Duterte in Laos on September 6th, and plans to touch on human rights as well as security concerns.

Mr Duterte’s crackdown on drugs and some strongly worded criticism he has made of the US present a dilemma for Washington, which has been seeking to forge unity among allies and partners in Asia in the face of an increasingly assertive China, especially in the strategic South China Sea.

There have been few signs in the Philippines itself of a backlash against the war on drugs.

However, today a newly formed group called the “Stop the Killings Network” announced a #Lightforlife campaign that would start with simultaneous candle-lighting events on Wednesday evening at six venues across Manila.