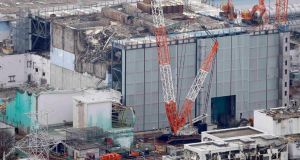 Japanese researchers say the cost of cleaning up from the Fukushima nuclear disaster could top $50 billion (€37.7 billion), four times the amount estimated by the government.

The figure does not include compensation or the multi-billion-dollar price tag for decommissioning the Fukushima Daiichi plant, which the government and regulators say will take at least 40 years.

Three of the plant’s six reactors went into meltdown as a result of the March 11th, 2011, earthquake and tsunami that struck off Japan’s northeast coast. The meltdowns forced more than 100,000 people to flee the contaminated zone around the plant in March; tens of thousands more have since left Fukushima prefecture voluntarily.

Tokyo Electric Power Co (Tepco), operator of the Daiichi plant, admitted this week that radiation is still leaking into the Pacific, further complicating the clean-up.

Japan’s government has allocated about $11 billion to decontaminate the zone. Most of the money is being paid to contractors who are using power hoses and diggers to scour away dust and topsoil from the most contaminated areas.

However, experts from the National Institute of Advanced Industrial Science and Technology warn the total cost of decontaminating the evacuation zone will be about $20 billion, with another $30 billion for areas further away.

Many are sceptical that the government-led clean-up effort will succeed in making the area habitable again, or that evacuees will move back when it is finished. “It doesn’t matter what the government says, we’ll never go home. Most of us accept that,” says Yukiko Kameya (68), who fled from Futaba town, next to the plant.

Tepco has yet to pay most refugees full compensation for the loss of their homes and other assets. “The government should study the costs before deciding whether to complete decontamination or reallocate the money to help people rebuild their lives,” researcher Junko Nakanishi told state broadcaster NHK.

Tepco has received an estimated ¥3.5 trillion in public money since the disaster began. Last year, the government took majority control of the utility, allowing it to continue as a limited company with shares traded on the stock exchange.

Many observers believe the compensation process will drag on for years, adding to the final bill for the disaster.

“The victims of this disaster often had large houses, rice fields, livestock and land and most had to move into small urban apartments or temporary housing,” says Yasushi Tadano, a Tokyo-based lawyer who is helping to sue Tepco. “The amount of compensation being offered is totally insufficient.”