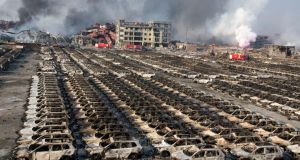 Smoke billows from the site of an explosion that reduced a parking lot filled with new cars to charred remains in northeastern China’s Tianjin municipality. Photograph: Ng Han Guan/AP

Thousands of burned-out, brand-new cars huddled in burned-out rows in what used to be the shiny logistics hub of Binhai New Area in the northeastern Chinese city of Tianjin.

Behind the shells of the vehicles was a twisted tableau of melted containers from which smoke billowed.

It was never supposed to be like this. The scene, where at least 50 people lost their lives and hundreds were injured in two devastating explosions on Wednesday night, looked as if a sadistic child had taken a cigarette lighter to the toy box.

Within blast distance of the explosion, residents were shuffling across pavements coated in broken glass, marvelling at how all the windows in apartment buildings and cars hundreds of metres from the explosion were smashed.

We were turned back from the site where the explosions ripped like a double thunderbolt through this busy city. The air stank, so we put our masks on, and worried about the fact that lethal acids had leaked into the water near the site.

Windows were smashed in buildings as far as 1km away, walls were knocked over, and firefighters were still wrestling with how to deal with the fire that continued to rage.

Last night the firefighters went back into the zone where so many of their colleagues – at least 12 at the last official count – had perished. Because it is a chemical-based fire – one which threatens two remaining tanks – specialised and risky methods have to be employed.

On Thursday, authorities mobilised a squad of specialist, chemical-trained troops to deal with the fires. All day, social media told the take of the destruction, with many harrowing videos on Weibo, the Chinese version of the banned Twitter service.

Tianjin, the fifth biggest city in China, is the largest port in the world in terms of throughput. After a week in which China devalued its currency amid signs of a weaker economy, there were questions over whether this explosion could affect the country’s broader economic health.

Probably not – but it has done nothing to counteract poor sentiment about the fate of the world’s second largest economy.