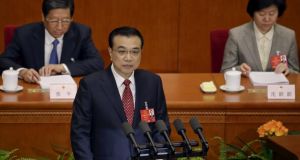 China’s political leadership took aim at Hong Kong and Taiwan at the country’s annual parliament, the National People’s Congress yesterday, urging Hong Kong not to “politicise everything” and warning self-ruled Taiwan against any moves towards independence.

“We will resolutely contain ‘Taiwan independence’ secessionist activities in any form, safeguard the country’s sovereignty and territorial integrity, and never allow the historical tragedy of the nation being split to happen again,” president Xi Jinping told a group of lawmakers from Shanghai on the first day of the conference.

China considers self-ruled and democratic Taiwan an inalienable part of China. Defeated nationalist Kuomintang (KMT) forces fled to Taiwan in 1949 after losing the Chinese civil war to the communists.

In January, Tsai Ing-wen of the independence-leaning Democratic Progressive Party (DPP) defeated by a landslide the KMT party, which had ruled Taiwan for eight years and encouraged closer cooperation with its cross-strait rival.

“Hong Kong’s biggest advantage is its reliance on the inland areas of the motherland,” Zhang told delegates.

Since it was returned to Chinese rule in 1997, the former British colony has had a great degree of autonomy under the “one country, two systems” framework. However, the disappearances across the border of five Hong Kong booksellers who published books critical of China’s leaders have raised fears that autonomy is under threat. The booksellers have recently made public confessions on Chinese TV saying they were “assisting with enquiries” but many believe they were “involuntarily removed”.

In his work report on Saturday, premier Li Keqiang said that Hong Kong’s economic development would be “elevated” by Beijing.

China’s slowing economic expansion, and fears it could be heading for a hard landing, have dominated the NPC so far. The country’s top planner, Xu Shaoshi, head of the National Development and Reform Commission, insisted that China wasn’t a drag on the global economy, but conceded that uncertainty and instability in the global economy do pose a risk to the country’s growth.

China has set a growth target of 6.5 per cent to 7 per cent for this year. “China will absolutely not experience a hard landing,” MrXu told a briefing.