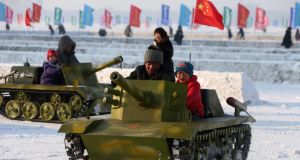 A Chinese man and a child ride a toy tank on the frozen Songhua River in Harbin city in China’s Heilongjiang province. Photograph: Wu Hong/EPA.

Changes to China’s strict one-child policy, which will allow more parents to have a second child, will begin to roll out early next year.

The policy change is expected to go into force in some areas of China in the first quarter of 2014, Yang Wenzhuang, a director at the National Health and Family Planning Commission, told the official Xinhua news agency.

Beijing said last month it would allow millions of families to have two children, the most radical relaxation of its strict one-child policy in close to three decades.

The move is part of a plan to raise fertility rates and ease the financial burden on China’s rapidly ageing population.

Authorities were in the process of calculating the number of eligible couples, Mr Yang said.

The policy move has buoyed baby-related stocks and has seen a rush for fertility-boosting products.

Xinhua cited members of parliament debating the easing of the rules on Tuesday as saying that it was important the country continues to enforce family planning and that people who violate the rules are punished.

“China still has a large population. This has not changed. Many of our economic and social problems are rooted in this reality,” Xinhua quoted member of parliament Jiang Fan as saying. “We could not risk letting the population grow out of control.”

China, with nearly 1.4 billion people, is the world’s most populous country. The government says the policy of limiting families to one child, which covers 63 per cent of the population, has averted 400 million births since 1980.