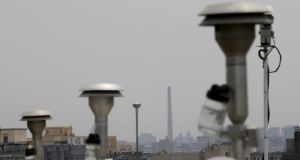 Devices for collecting samples of Beijing’s air. Recent weeks have seen a noticeable reduction in pollution in Beijing which many have put down to the closure of coal-fired power plants in or near the city. Photograph: Reuters/Kim Kyung-Hoon

China’s greenhouse gas emissions could start to fall within 10 years, according to a report from the London School of Economics.

This would be five years earlier than expected, and would offer a considerable boost towards efforts to protect the climate because China is the world’s biggest emitter of greenhouse gases.

“China’s greenhouse gas emissions are unlikely to peak as late as 2030 – the upper limit set by President Xi Jinping in November 2014 – and are much more likely to peak by 2025,” the report said.

It said China’s “coal consumption fell in 2014, and fell further in the first quarter of 2015”, and estimated that China’s overall emissions could peak at the equivalent of between 12.5 billion and 14 billion tonnes of carbon-dioxide a year by 2025, up from some 10 billion in 2012.

Recent weeks have seen a noticeable reduction in pollution in Beijing, which many put down to the closure of coal-fired power plants in or near the city as well as longer-term measures to shift industry away from the capital.

Unusually the report is more optimistic than the Chinese government’s own expectations. On Monday, Wang Zhixuan, secretary general of the China Electricity Council, predicted that China’s emissions from the power sector would keep rising to 2030, driven by lower prices of coal than natural gas.

The upbeat news comes as senior negotiators from almost 200 governments are meeting in Bonn, Germany, to work on a UN deal due in Paris in December to limit temperatures.

“The UN climate change conference in Paris later this year will be more successful if governments everywhere understand the extent of change in China [and] its implications for global emissions,” wrote the report’s authors, Fergus Green and Nicholas Stern, both from the LSE’s Grantham Research Institute on Climate Change and the Environment and the Centre for Climate Change Economics and Policy.

Part of the reason behind the improvement in China’s efforts to cut emissions has been its commitment to renewable energies. China is the world’s top investor in wind and solar power.

“In 2014 the Chinese government gave the country’s major environmental problems high priority, making considerable efforts to safeguard the people’s right to a clean and healthy environment, and further exploring a new way to make ecological progress with Chinese characteristics,” the authors said. – (With additional reporting by Reuters)