China “gravely concerned” over reports US tapping its phones 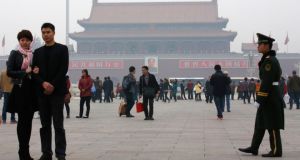 China said it was “gravely concerned” about reports the United States has been tapping its phone calls and has demanded an explanation from Washington about revelations it keeps intelligence sites in China.

“We have made representations to the US side, and we demand the US side clarify and explain itself on this matter,” foreign ministry spokeswoman Hua Chunying told a regular news briefing.

The latest revelations by whistle-blower former NSA contractor Edward Snowden showed the US has about 80 intelligence-collection sites worldwide, including in China.

The news magazine Der Spiegel revealed that Beijing, Shanghai, Chengdu, Hong Kong and Taipei were locations where the US had its eavesdropping Special Collection Service at US embassy and consulates.

China has long been depicted as a grave offender in cyberwarfare and espionage, but the Chinese argue the Snowden revelations show they are more sinned against than sinner.

“It’s not hard to imagine what the US would do to countries that are not its allies, such as China, after it was exposed to have been snooping on its allies,” defence ministry spokesman Yang Yujun told a briefing.

Diplomatic mask
In response to the eavesdropping scandal, the Chinese military said it was time to boost information security. There have also been stories that some intelligence officers use their diplomatic status as a cover.

China and the US must work together and faithfully observe the mutual agreement to build a new type of relations between major powers defined by non-confrontation, mutual respect and win-win co-operation in handling every aspect of Sino-US relations, said Ms Hua.

“A healthy and steady Sino-US relationship is beneficial not only to the two countries, but also to the stability and prosperity of the Asia-Pacific region and the whole world,” she said.

Zhou Zunnan, a professor with China Foreign Affairs University, told the Global Times: “If proven to be true, the covert surveillance mission would have been a severe breach of China’s sovereignty and dignity.” Meanwhile, Li Haidong, a professor of the Institute of International Relations at China Foreign Affairs University, said it was further evidence of US hypocrisy.