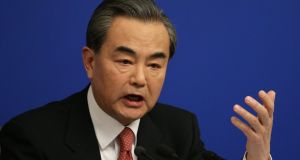 Chinese foreign minister Wang Yi gestures as he answers a question from a reporter during a press conference on the sidelines of the fourth session of the 12th National People’s Congress (NPC) in Beijing on Tuesday. Photograph: EPA

China’s foreign minister Wang Yi has defended its control of disputed territories in the South China Sea, saying his country was first to “discover” them and building infrastructure there was consistent with China’s interests.

“It is a pressing task for China’s diplomacy to better protect its growing overseas interests,” Mr Wang told a news conference at China’s annual parliament, the National People’s Congress, insisting that China was not pursuing an expansionist path, nor would it engage in any form of power politics.

“Rather we want to pioneer the Chinese way of protecting overseas interests, one that is in tune with the trend of the times and welcomed by other parties,” he said.

Quite who these welcoming other parties are is open to question. Beijing has maritime claims over almost all of the South China Sea, but nearly all of its neighbours in the region, including Brunei, Malaysia, the Philippines, Taiwan and Vietnam also have claims and have expressed concerns about China’s activities there.

China is building airstrips and deploying missiles on man-made islands in the area, raising tensions in the region and prompting accusations that Beijing is trying to militarise the area.

The US has also been sending Navy warships and flying aircraft over disputed territories to register its displeasure with China’s activities. US defence secretary Ash Carter has warned of “specific consequences” if China takes “aggressive” action in the region.

Mr Wang said the region, through which $5 trillion (€4.54 trillion) worth of shipping passes annually, was home to the world’s freest and safest shipping lanes, and he said it was the US, not China, which was trying to militarise the region.

He reiterated China’s position that as it was the first to explore, name, develop and administer many of these islands, then it had a legitimate claim to them.

Turning to North Korea, Mr Wang said “blind faith” in sanctions and international pressure were not necessarily the best way to secure the future of the Korean peninsula.

“To eventually resolve the peninsula issue, we have to adopt multi-level approach and apply the right medicine. To have blind faith in sanctions and pressure would in fact be irresponsible to the future of the peninsula,” he told the news conference.

The UN Security Council imposed its toughest sanctions yet on North Korea after it conducted its fourth nuclear test in January and a long-range rocket launch last month.

There have been lingering concerns about China’s resolve in implementing the sanctions on its old ally. Investment and aid from China is said to be key in keeping the government in Pyongyang going.

Mr Wang said China would support the implementation of Security Council Resolution 2270 “in its entirety” but said there could be no solution without multilateral talks.

“Sanctions are just necessary means, maintaining stability is the pressing priority, and only negotiation can provide a fundamental solution,” the foreign minister said.

“As the largest neighbouring country of the peninsula, China will not sit idly by and watch stability on the peninsula be destroyed on a basic level.”

Mr Wang also took aim at Japan, with whom China has numerous ongoing issues, including territorial disputes and a belief that Japan has failed to adequately atone for war crimes carried out during the Second World War.

He accused Tokyo of “double dealing ” in its relations with China.

“Thanks to the efforts of wise people on both sides, there are signs of improvement in the China-Japan relations, but there is little ground for optimism,” he said.

He also urged Americans to learn more about Chinese history and culture, and not to be so suspicious about China, which was causing frictions between the two countries.

“The source of these frictions is that some people in US who have strategic suspicions about China. They are worried that China will one day surpass the US; I want to emphasise once again that China is not the US and China will not, and cannot become the US, we don’t want to displace anyone or dominate anyone.”