China bird flu virus “one of most lethal”

Strain of virus has killed 22 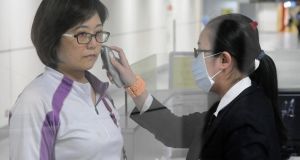 A new strain of bird flu that has killed 22 people in China was “one of the most lethal” flu viruses it had encountered and was more easily transmittable from poultry to humans than an earlier strain that had killed hundreds around the world since 2003.


Masks
All around the capital and other cities, people are wearing masks and hand-cleansers are appearing at public venues. Schools are urging parents to monitor their children for signs of sickness.

“This is definitely one of the most lethal influenza viruses that we’ve seen so far. When we look at influenza viruses, this is an unusually dangerous virus for humans,” said Keiji Fukuda, the WHO’s assistant director-general for health security. He said “the situation remains complex and difficult and evolving”.

An international team of experts led by the WHO and the Chinese government conducted a five-day investigation but said they were no closer to knowing whether the virus could become transmissible between people.

Meanwhile, the government in self-ruled Taiwan confirmed an H7N9 bird flu infection in a Taiwanese traveller from China, which shows the risk of the killer virus entering cities outside the mainland and spreading in the region.

A 53-year-old man tested positive for the latest strain of avian flu after a trip to the eastern mainland city of Suzhou, returning to Taiwan via Shanghai, Taiwan’s Centres for Disease Control said yesterday.

The patient did not come into contact with birds and poultry and is in a critical condition at an unspecific medical facility, minister of health Chiu Wen-ta said.
The outbreak has so far been centred on Shanghai and neighbouring provinces. A total of 33 cases, including 12 that have ended in death, have been reported in Shanghai.