Barack Obama becomes the first sitting US president to visit Hiroshima, the city that the US dropped an atomic bomb on in 1945, and calls for the elimination of nuclear weapons. Video: Reuters 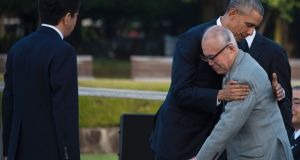 Japan’s prime minister Shinzo Abe looks on as US president Barack Obama hugs Shigeaki Mori, a survivor of the 1945 atomic bombing of Hiroshima, during a visit to the Hiroshima Peace Memorial Park on Friday. Photograph: Jim Watson/AFP/Getty Images

In the first Hiroshima visit by a sitting American president, Barack Obama made an impassioned plea for a world without nuclear weapons, asking for “courage to escape the logic of fear.”

The 1945 destruction of Hiroshima by a US bomber “demonstrated that mankind possessed the means to destroy itself,” Mr Obama told an audience at the city’s Peace Memorial Park that included elderly survivors of the bombing.

“We come to ponder the terrible forces unleashed in the not so distant past. We come to mourn the dead ... their souls speak to us and ask us to look inward. To take stock of who we are and what we might become,” he said.

The long-awaited speech, delivered under a dusky sky near the city’s iconic Dome, ended with an emotional meeting between Mr Obama and Sunao Tsuboi, one of Japan’s most famous A-bomb victims, or hibakusha.

The 91-year-old, visibly scarred Tsuboi gripped the president’s hand and held it until he had delivered a short pre-prepared speech. There was some doubt whether Mr Obama would meet any survivors at all, given how charged such an encounter might be.

Mr Tsuboi had repeatedly said that he never believed a sitting US president would visit the city while he was still alive.

Before walking to the park’s cenotaph, Mr Obama briefly visited the museum, which contains artifacts from the bombing, including a toddler’s charred tricycle and a watch that stopped at 8:15am on August 6th, 1945.

The uranium bomb that detonated over Hiroshima at that moment killed an estimated 70,000. Tens of thousands more died in the subsequent months and years from burns and radiation-related illnesses. The destruction of Hiroshima and Nagasaki three days later are still the only instances of nuclear weapons used in warfare.

Both Mr Obama and Japanese prime minister Shinzo Abe laid wreaths at the cenotaph. Mr Abe recalled the thousands of “innocent lives” blinked out by the bomb. “This tragedy must not be allowed to occur again,” he said. “We are determined to realise a world free of nuclear weapons.”

In a careful piece of political theatre, the two leaders turned to shake hands in front of the cenotaph, a symbolic gesture designed to show the strength of the unlikely alliance that grew from the ashes of the second World War.

Controversy dogged the event. Some survivors and prominent Japanese politicians demanded an apology, which Mr Obama, mindful of the political fallout back home, where many believe the bombing helped end the war, never uttered.

Many survivors are critical of Mr Obama’s record on nuclear disarmament, despite a now famous anti-nuclear pledge in 2009, which won him a Nobel Peace Prize. Mr Abe’s efforts to pull Japan away from the pacifism that took root in Japan after 1945 are also unpopular in Hiroshima.

The select audience included US Ambassador to Japan Caroline Kennedy, daughter of slain president John F Kennedy, and Shigeaki Mori, a hibakusha who fought for official recognition of the 12 Americans killed in the Hiroshima bombing. Mr Obama was later seen hugging Mr Mori.

In a typically eloquent speech, Mr Obama warned that mankind’s technological abilities risked outstripping moral progress. “Technological progress without an equivalent progress in human institutions can doom us,” he said, adding that such technology “requires a moral revolution as well.”