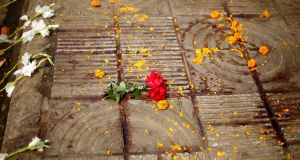 Flowers lay on the spot where Bangladeshi blogger Avijit Roy was killed in a street in Dhaka, Bangladesh, in February 2015. Photograph: Abir Abdullah/EPA

A publisher of secular books has been hacked to death in the Bangladesh capital, police said.

In a separate attack in Dhaka, police said two writers and a publisher were stabbed and shot at a publishing house.

The attacks come amid fears about the rise of radical Islam in Bangladesh.

The body of Faisal Abedin Deepan, of the Jagriti Prokashoni publishing house, was found inside his office, senior police officer Shibly Noman said.

Earlier in the day, publisher Ahmed Rahim Tutul was attacked in his office and seriously wounded. Two writers were also wounded in that attack.

Both of the publishers had published books by Bangladeshi-American blogger Avijit Roy, who was hacked to death in February, one of four secular bloggers killed in Bangladesh this year.