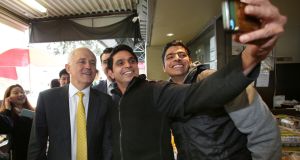 Australia’s Liberal-National coalition has been returned to power, six days after counting started, after three crossbenchers said they would back Malcolm Turnbull as prime minister when parliament resumes.

The coalition may not need those minor party and independent votes, though. It has 73 confirmed seats to Labor’s 66, with six still in doubt. Labor was ahead in five of those six, but its lead was diminishing as more postal votes – which traditionally come from older, more conservative voters – arrived to count centres.

Securing three of the remaining six seats would be enough to enable the ruling coalition to govern in its own right in the 150-seat lower house.

Mr Turnbull had not yet declared victory yesterday, but looked slightly more relaxed, or at least not as shell-shocked, as he had appeared since election day.

One of his senior ministers, Christopher Pyne, did claim victory, but in Australia it is not over until state broadcaster ABC’s election guru Antony Green says it is. And he did, saying: “Malcolm Turnbull will still be prime minister in two weeks time unless his party chucks him out.”

Green was joking. Sort of. When Mr Turnbull became prime minister last September in an internal Liberal Party coup, he was Australia’s fourth prime minister in just over two years.

He comes from the moderate wing of his party and rolled (to use the Australian vernacular) Tony Abbott from the dominant right of the party. His reasoning at the time was that Mr Abbott could not win the election. Those who backed Mr Turnbull are surely now wondering why they went to all that bother to lose a dozen seats or more.

For the Liberal Party – the majority side of the coalition – the postmortem will be long and bitter. Senator Cory Bernardi (whose wife Sinéad is Irish) posted a message on his website saying the election result was a “disaster” and that it was important to unite “Australian Conservatives . . . regardless of their party affiliation”.

He has denied he intends setting up a breakaway party, but has asked fellow travellers to register their interest at a new website – conservatives. org.au.

The political instability has not been helped by ratings agency Standard & Poors downgrading Australia’s long-term outlook from stable to negative due to “growing fiscal vulnerabilities”, meaning the country is one step closer to losing its triple-A sovereign credit rating.

For the Labor Party and its leader, Bill Shorten, the election was far more successful than almost anyone thought possible. One of its new MPs, Linda Burney, is the first Aboriginal woman to be elected to the lower house and she is likely to be joined by Anne Aly, who will be the first Muslim woman elected an MP.