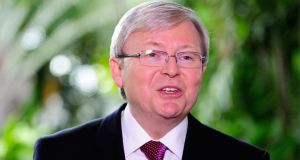 Refugee advocates expressed outrage yesterday after Australia’s prime minister Kevin Rudd announced that asylum seekers who arrive by boat will be sent to Papua New Guinea and have no chance of getting into Australia, even if they are genuine refugees.

As well as providing all resettlement costs for refugees, Australia is expected to provide health and education funding in Papua New Guinea as part of the new policy.

In a joint press conference with Papua New Guinea prime minister Peter O’Neill, Mr Rudd said the deal was aimed at stopping “the scourge of people-smuggling”.

“I understand this is a very hardline decision. I understand the different groups in Australia and around the world will see this decision in different ways,” he said. “But our responsibility as a government is to ensure we have a robust system of border security and orderly migration on the one hand, as well as fulfilling our legal and compassionate obligations under the [UN] refugees’ convention on the other.”

The arrangement is to be effective for 12 months, with no cap on the number of people who can be transferred. Papua New Guinea’s Manus Island detention centre is to be expanded from its current capacity of 600 to to 3,000. About 150 people seeking asylum in Australia are already in the centre.

Mr O’Neill said genuine refugees would be welcome in his country. “I believe that the processing centre and the resettlement arrangements that we are forging will enable us to have an orderly processing of citizens, of people who are seeking genuine citizenship of other countries in the region,” he said.

Opposition Liberal party leader Tony Abbott, who for years has portrayed the Labour government as being “soft” on asylum-seeker boats, welcomed the policy change, but said it would not be properly implemented by Mr Rudd. “I think the question that the Australian people have to ask is, who do you trust on this subject? Who do you trust to stop the boats? Do you trust the political party which started them up again?

“Or you trust the party that is the original and the best when it comes to actually stopping the boats,” he said.

Greens leader Christine Milne said the prime minister had “leapfrogged Tony Abbott on cruelty”.   Human rights lawyer David Manne also condemned the new policy. “Australia hosts only 0.3 per cent of refugees worldwide and yet, what we see here is a policy designed not only to deter asylum-seekers from seeking refuge in Australia, but one that also proposes to shift our responsibilities onto others,” he said.

With Labour and the Liberal-National coalition neck-and-neck in the polls and the parties having similar policies on asylum-seeker boats, Mr Rudd may call a general election as early as Monday.