Bats are dropping from trees, kangaroos are collapsing in the Outback and gardens are turning brown 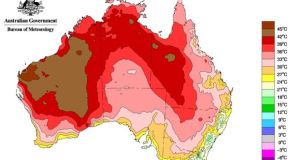 Bats are dropping from trees, kangaroos are collapsing in the Outback and gardens are turning brown.

While North America freezes under record polar temperatures, the southern hemisphere is experiencing the opposite extreme as heat records are being set in Australia after the hottest year ever.

Weather forecasters in Australia said some parts of the sparsely populated Pilbara region along the rugged northwest coast today were approaching 50 degrees Celsius. The record high of 50.7 degrees was set in 1960 in Oodnadatta, South Australia.

The late arrival of the monsoon in northern Australia, which has a cooling effect, is contributing to the searing heat, said Karly Braganza, the manager of climate monitoring at the Bureau of Meteorology. Global warming also is playing a role, he said.

So far, this year’s heat wave, which started around Christmas and has moved counterclockwise across Australia’s north, is not as extensive or prolonged as last year’s. But it would likely continue and move toward South Australia state, Mr Braganza predicted.

“Certainly looking at the forecast over the next week, it’s looking like that heat is going to continue,” he said.

Since December 27th, records have been set at 34 locations across Australia - some by large margins.

The extreme temperatures come on the heels of Australia’s hottest year on record, beating the previous record year of 2005, with mean temperatures 1.2degrees above the 1961-90 average.

The heat wave has taken a toll on wildlife, too.

In Winton, Queensland, the place where Australia’s unofficial anthem Waltzing Matilda was penned, a “large number” of parrots, kangaroos and emus have recently been found dead in the parched landscape, said Tom Upton, chief executive of Winton Shire Council.

“That’s as much to do with the extended dry as it is with the heatwave,” he said.

At least 50,000 bats had been killed by the heat in the state’s southeast, said Louise Saunders, president of the Queensland animal welfare group Bat Conservation and Rescue.

Heat-stressed bats - including the Black Flying Foxes, Little Red Flying Foxes and the endangered Gray-Headed Flying Foxes - cling to trees and urinate on themselves in a bid to reduce their body temperatures, she said.