Australia’s ruling coalition ahead of Labor in election count 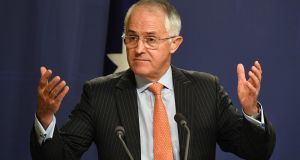 Prime minister Malcolm Turnbull at a press conference today after he rejected calls for him to resign over poor election result. Photograph: William West/AFP/Getty Images

Counting in the Australian election resumed on Tuesday and saw the ruling Liberal-National coalition pull ahead of the Labor opposition.

The coalition has now won 70 of the lower house of parliament’s 150 seats. Labor has 67, independents and minor parties have five, and eight seats are still too close to call.

Prime minister Malcolm Turnbull said he took “full responsibility” for the government’s poor election performance, but said voters were duped by claims the coalition planned to privatise Medicare. “There is no doubt that Labor cynically abused the trust of Australians by lying to them about this and it is something for all of us, politicians and the media, to contemplate,” he said.

Two of the five – Adam Bandt of the Greens and Tasmanian independent Andrew Wilkie – are likely to back Labor, while Queensland maverick Bob Katter backed the coalition the last time there was a hung parliament, in 2010, and will almost certainly do so again. This leaves Cathy McGowan in the Victorian seat of Indi, and Rebekha Sharkie in the South Australian seat of Mayo. Both Ms McGowan and Ms Sharkie have previously worked for Liberal MPs, but both defeated Liberals to win their seats.

Labor leader Bill Shorten says Mr Turnbull may call a snap poll: “This is a divided government led by a weak prime minister so . . . the easy option for him would be to pull the rip cord and look at having another election.”

The senate count will take longer to finalise, but is already notable for the return of anti-immigration party One Nation. Its leader, Pauline Hanson, is back in parliament after 18 years. In her maiden speech in 1996, Ms Hanson said Australia was at risk of being “swamped by Asians”. She says time has proved her right.

“There was a great deal of ugliness and division unleashed by Ms Hanson . . .” he told ABC TV. He has invited Ms Hanson to join him for a pho soup and a chat.