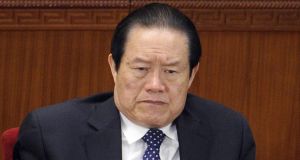 Zhou Yongkang was reportedly in trouble with the new administration over graft charges.

Rumours of China’s ex-security chief Zhou Yongkang’s fall from grace appear to have been exaggerated after he was seen attending an event at his former university yesterday.

Mr Zhou, 70, who was a senior figure in China’s Communist Party elite until he retired from the standing committee of the politburo late last year, was reportedly in trouble with the new administration over graft charges.

However, the website of the China University of Petroleum showed photographs of an inscription Mr Zhou wrote to his alma mater, and others of him at a graduate event.

If Mr Zhou was indeed in trouble, he is unlikely to be making such a high-profile public appearance.

Hong Kong’s South China Morning Post reported in late August that Zhou was facing a corruption probe, although later reports said he was merely assisting with an investigation.

The idea that China’s leaders would endorse a corruption investigation into Zhou Yongkang was seen as highly unusual.

However, speculation was fuelled by the news last month of the formal dismissal of the cadre Jiang Jiemin, director of the commission overseeing China’s major state-owned companies.