AC/DC's drummer Phil Rudd is charged with attempting to arrange a murder, threatening to kill, and drug possession in New Zealand. Video: Reuters 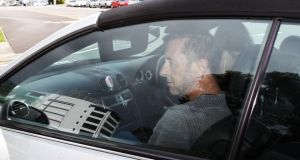 AC/DC drummer Phil Rudd has been charged with attempting to procure murder, threatening to kill and possession of narcotics.

The 60-year-old Australian entered no plea to the charges during a brief court appearance in Tauranga, about 200 km southeast of Auckland.

He was remanded on bail with restrictions on his movements and ordered to re-appear in court on November 27th, a court official said.

Mr Rudd could face up to 10 years jail if convicted of the most serious charge of attempting to procure murder.

Police arrested Mr Rudd, whose birth name is Phil Witschke, during a raid on his home earlier today.

The raid followed a tipoff from a member of the public, police said.

Police declined to comment on the nature of the allegations against the drummer.

The Sunlive news site said Mr Rudd allegedly tried to procure the murder of two people, and threatened to kill one of them in late September.

The Australian born Mr Rudd moved to the seaside city of Tauranga after he was sacked from the band in 1983.

He rejoined AC/DC in 1994, but has remained in New Zealand, where he owns a restaurant.

He was convicted and fined for possessing cannabis in 2010.

AC/DC is due to release their first album in five years, called Rock or Bust, on December 2nd.