A quarter century after Tiananmen Square, China has made huge economic – not political – progress

On the anniversary of June 1989, the Communist Party is still silencing debate 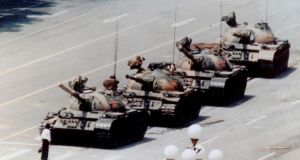 “Tank Man” who placed his shopping bags down to face down the tanks. in Beijing’s Tiananmen Square on June 5th, 1989, at the height of the pro-democracy protests. Photograph: Jeff Widener/AP

The anniversary of the June 4th, 1989, crackdown on the pro-democracy movement, a nationwide protest centred on Tiananmen Square at Beijing’s heart, is always a fraught time in China.

This year marks 25 years since the attack on demonstrators, and the Communist Party is more determined than ever to block discussion of what happened on that day and silence its critics with a wide-ranging round-up of dissenting voices.

Yesterday, on Chang’an Avenue, or the Avenue of Heavenly Peace, which leads to the vast square, there were armoured vehicles, soldiers and People’s Armed Police.

Journalists have been warned off going to the square on the anniversary.

This is due in part to increased terror activity by Xinjiang separatists, which has led to a spate of dreadful attacks around China, but the deployment is aimed at ensuring Tiananmen Square does not become a focus for dissent on the 25th anniversary.

On the night of June 3rd, 1989, there was heavy armour on the streets too, as tanks rumbled on to Tiananmen Square to confront the skinny students with loudhailers scattered around the vast concourse overlooked by Mao Zedong’s portrait before the Forbidden City.

Hundreds, possibly thousands were killed. Early casualty figures from the Chinese Red Cross put the dead at 2,600, but the Chinese government says 241 died.

Working out how many people perished has not been made any easier by the fact the government has always banned investigation into what happened.

The Communist Party insists the crackdown was necessary to ensure stability and lay a solid foundation for the political and economic future of China.

The intervening years have seen China undergo a great period of social change, with millions lifted out of poverty and the country emerging as a world power.

President Xi Jinping has embarked on an ambitious programme of reforms but they are all economic, and there are no signs whatsoever of political reform, of greater democratisation, taking place. Politically, nothing has really changed in a quarter century – the same party is in power and the same rules apply.

The dreadful events of early June 1989 mean there is uneasiness overseas at one-party rule by the Communist Party, and have made it difficult to truly celebrate the country’s remarkable economic achievements.

As the respected legal scholar Jerome A Cohen wrote in the South China Morning Post: “In recent years, despite China’s impressive economic development, the situation for civil and political rights has significantly deteriorated, and prospects for the immediate future appear grim.”

These days, there is little awareness of what happened among young people, but this is a carefully cultivated reality, as the party forbids public discussion – 1989 is banned from school textbooks and Chinese websites.

The run-up to the anniversary has been marked by a stifling clampdown on press freedom, and the detention of human rights defenders and activists, including lawyer Pu Zhijiang, Beijing University lecturer Hu Shigen, Beijing Film Academy professor Hao Jian, researcher Xu Youyu and writer Liu Di.

China is ranked 175th out of 180 countries in the 2014 Reporters Without Borders world press freedom index, and RSF has pointed out how the number of journalists arrested in the run-up to the anniversary has intensified.

Other journalists arrested include Xiang Nanfu, a contributor to the Boxun news website, while journalist Gao Yu has been placed in criminal detention.

“As in the case of Gao Yu, the fact that a committed journalist such as Wu Wei has not been heard from is of the utmost concern,” said Benjamin Ismail, head of the press freedom organisation’s Asia-Pacific desk.

“While acknowledging China’s advancement of the economic and social wellbeing of its people in the past 25 years, the EU also hopes to see greater space open up for discussion and debate about China’s recent history and for lawyers, human rights defenders and journalists to carry out their work without harassment or interference,” it said.

The catalyst for the events of 1989 was the death of the sacked general secretary of the party Hu Yaobang, on April 15th of that year, a reformer purged by then supreme leader Deng Xiaoping, architect of China’s opening-up process.

In recent months, there have been events commemorating Hu Yaobang, including one event attended by former leader Hu Jintao (no relation).

Hu Jia – also no relation – the Aids activist who has been jailed for his views and remains under house arrest in Beijing, remembers how in 1989, the Hu Yaobang memorials turned into a movement, and students began to gather in cities.

“Both Hu Yaobang and Zhao Ziyang [the communist leader who tried to reason with the students and who was placed under house arrest for the rest of his life] chose the side of right, at the cost of huge political sacrifice, such as ending their political career,” said Hu.

“We need to use what they [Hu and Zhao] did and use the truth of history to attack the current government’s denial and distortion of history,” said Hu.

Passing the Beijing Hotel yesterday, the heavy vehicles harken back to one of the most startling images of defiance – “Tank Man” who placed his shopping bags down to face down the tanks.

After a quarter of a century the image remains fresh, but the challenge he laid down has never been taken up, merely rolled over.