49 killed in plane crash in Laos 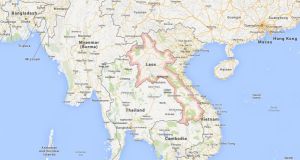 A Lao Airlines flight crashed into the Mekong River in southern Laos today, killing all 49 people onboard, according to a statement from the Laotian government.

The statement did not specify the nationalities of the passengers, but a spokesman for Thailand’s foreign ministry, Sek Wannamethee, said the airline had told him that the passengers were from Laos, Vietnam, Australia, Canada, China, France, South Korea, Taiwan, Thailand and the United States.

Flight QV301 was flying from the Laotian capital, Vientiane, to the southern Laotian city of Pakse and was carrying 44 passengers and five crew members, the Laotian government’s statement said.

The statement said the plane ran into “extreme bad weather conditions” as it attempted to land in Pakse, a popular destination with tourists who visit the coffee plantations of the Bolaven Plateau and the former royal principality of Champasak.

A representative for the airline who answered the phone in Vientiane said the aircraft was an ATR, a French-made turboprop commonly used in the region to serve small airports.

“There was turbulent weather during the flight,” said the woman, who refused to give her name.

She said the airline would provide more information on Thursday.

Laos, impoverished and landlocked, is governed by a secretive and insular Communist party.

Calls to government offices and police stations were not answered late on Wednesday.

The statement about the crash was posted on the Facebook page of Lao Airlines.

Vachirapong Boonkrajang, the head of a voluntary Thai rescue organisation in Ubon Ratchathani, a province in Thailand along the Laotian border, told a Thai television channel that he would send a team of divers to recover bodies on Thursday.

“I don’t think Laos has the facilities to conduct this type of operation,” he said.

But an online report in The Bangkok Post late on Wednesday cited a foreign resident of Pakse who said the bodies of crash victims were being laid out in a Chinese temple. The unnamed resident described the scene as “an absolute horror”.