What’s at stake as conflict flares in Ethiopia? 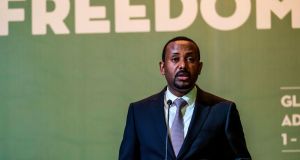 Heavy fighting has broken out in the northern region of Tigray after Abiy Ahmed, Ethiopia’s prime minister, announced he was sending troops to the restive area. Abiy alleged that Tigrayan troops had attacked a federal army base located there. Declaring that a “red line” had been crossed, the prime minister, who won the Nobel Peace Prize last year, said confrontation was the only option.

Why does this matter?

Ethiopia is the second-most populous country in Africa, with 110 million people. It is by far the most important power in the Horn of Africa. Instability there could spill out across the region. It would also destabilise what had been one of Africa’s most promising economic development stories.

Despite its association with famine in the 1980s, Ethiopia has become a source of hope in the continent. Under the previous coalition government, which ran the country for 27 years until 2018, the economy grew at nearly 10 per cent a year for roughly two decades. Although Ethiopia is still poor, those growth years transformed its prospects, improving infrastructure, as well as health and education levels, and holding out the possibility of the country achieving middle-income status.

So why the tensions if the economy has been doing so well?

The Ethiopian People’s Revolutionary Democratic Front (EPRDF), which ran the country after overthrowing a Marxist regime in 1991, devolved power to regions whose histories, languages and cultures make them more like nations. Unusually in Africa, Ethiopia was never colonised by European powers. However, its borders expanded greatly, especially in the 19th century, after successive emperors conquered other regions, which became resentful of centralised power and what they saw as an “Ethiopian empire”.

Under a 1995 constitution, autonomous regions – which now number 10 – were allowed to speak their own language and practise their own customs. Theoretically they were able to secede, but in practice their authority was curbed. To complicate things, the EPRDF was dominated by Tigrayans, who make up only 6 per cent of Ethiopia’s population.

As resentment grew, protesters took to the streets in huge numbers from 2015, particularly in Oromia and Amhara, whose people make up roughly 35 per cent and 27 per cent of the national population respectively. Thousands were killed and tens of thousands arrested. To help resolve the crisis, the coalition government in 2018 selected Abiy Ahmed, an Oromo, as prime minister, dealing a blow to the Tigrayans.

Who is Abiy Ahmed and why has he been unable to calm the situation?

Abiy is a former security chief who professes a liberal political and economic agenda. On becoming prime minister he released thousands of political prisoners, removed a ban on political parties and made peace overtures to Eritrea, which had become an independent country in the early 1990s but had fought Ethiopia from 1998 to 2000. For formalising peace with Eritrea, Abiy was awarded the Nobel Peace Prize last year.

At home, his compatriots in Oromia expected him to push a pro-Oromo agenda but they were disappointed with his Ethiopia-first policies. Critics, including in Tigray, say his emphasis on national unity threatens their autonomy. Loosening of restrictions on the media has unleashed a wave of ethnically focused hate speech that has fanned the flames. As Abiy’s early popularity waned, his government postponed elections due to have been held this August, ostensibly on the grounds of Covid-19. Prominent members of the opposition, including Jawar Mohammed, an Oromo leader turned national figure, were arrested.

Does Tigray have particular significance?

Yes. Tigrayans led the revolution that overthrew the Marxist Derg regime in 1991. They played an outsized role in the four-party coalition that ran the country until Abiy was appointed two years ago. Despite presiding over a strong economy and mostly competent administration, Tigrayan dominance bred resentment and allegations of corruption. Abiy purged his leadership of many Tigrayans, making enemies in the process. Tigray defied the postponement of the national presidential poll by holding elections in September. The region has a relatively strong military force.

What could happen next?

It is hard to gain a clear picture of what is happening because communications have been cut off. But if Tigray resists, serious fighting could ensue, as the TPLF has a tradition of resistance. Other regions, where some people also resent Abiy’s emphasis on national unity, may also become unstable. Friction has been frequent, leading to killings, in Oromia and Amhara in particular. Several regions in the south are pushing for more autonomy.

Could this have a regional impact?

Definitely. Ethiopia dominates the Horn of Africa and what happens there frequently affects events in Somalia, South Sudan and Eritrea, which borders on Tigray. Ethiopia is also in dispute with Egypt over Addis Ababa’s construction of the Grand Ethiopian Renaissance Dam, a large hydroelectric power plant that Cairo claims poses an existential threat through its potential to change the flow of the Nile on which Egypt depends.

Are Ethiopia’s economic gains in jeopardy?

Yes. Abiy’s government has proposed tweaking the successful state-led development model by opening up to private capital. As part of this it has been in the process, seemingly delayed, of privatising the telecoms sector, the world’s largest telecoms monopoly. With ethnic tensions high and elections stalled, foreign investors are likely to take a wait-and-see approach.