Video footage from security cameras obtained by Reuters on show the moment gunmen entered the Nairobi Westgate mall on September 21 and randomly shot down shoppers in the supermarket. Images of the gunmen praying are also on the recording. 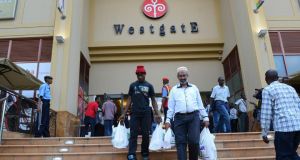 Kenya’s trendy Westgate shopping mall will reopen on Saturday, nearly two years after gunmen from the Somali militant group al Shabaab massacred at least 67 people inside and held out for four days as security forces laid siege to the complex.

There was no direct evidence to link the Co Down-born al-Shabaab member Samantha Lewthwaite with the incident, but Interpol’s international alert about her sparked focus on the “white widow”.

Once a totem of Kenya’s growing prosperity, the Westgate building has since become symbolic of growing insecurity in the east African nation and President Uhuru Kenyatta’s inability to prevent frequent Islamist attacks on Kenyan soil.

Images beamed across the world during the raid dented Kenya’s image abroad and scared off tourists, hurting a vital sector of the economy.

Kenya’s embarrassment was compounded by Westgate security footage which showed soldiers looting the mall after the Somali militants were killed.

Evans Kidero, the Nairobi governor, said the September 2013 attack was “one of the saddest days in Kenyan history” but touted the re-opening of the mall as a triumph of national resilience in the face of militant attacks.

“They killed... our friends and relatives, but they did not kill our spirit,” he told reporters after touring the building where workmen were slapping on final licks of paint and staff were unfurling promotional banners.

Major Western brands, including Subway, KFC and Converse, plan to open stores in the new mall along with Kenyan companies such as Nakumatt, a high-end supermarket chain popular with well-heeled locals and expatriate workers.

Al Shabaab has killed more than 400 people on Kenyan soil over the last two years, including 148 in a rampage by masked gunmen at a university in April. Britain and other Western powers have issued several travel advisories warning of more attacks.

But Kidero, like many other Kenyan officials, said security has been stepped up and urged Kenyans to continue shopping in malls as the east African nation was open for business.

“Kenya is safer than ever. If it wasn’t, Obama wouldn’t be coming,” Kidero added, in reference to US president Barack Obama’s visit to his father’s homeland later this month.

IRG, a private Israeli company, has been put in charge of running security in the re-opened mall.

It has about 25 specialist staff and will use about 55 guards from security firm G4S, one IRG employee told Reuters inside Westgate.

“This will be the safest mall in the world,” said Cohen, an IRG employee who did not wish to give his full name.

Outside the mall, several young Kenyans were waiting in hope the re-opening will see new jobs created in a country where poverty remains rife and unemployment high.

“Ninety-nine percent of my worries are about security,” said Rosemary Muthoni, a 28-year-old seeking a job at the mall. “But you have to take a chance to survive.”