West African nations should prepare for Ebola, Who says 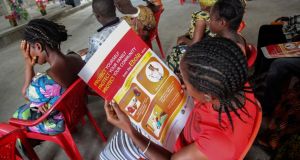 A Liberian woman reads an Ebola information poster on the prevention of the Ebola epidemic, during UNICEF’s sensitisation campaign. Photograph: Ahmed Jallanzo/EPA

West African countries neighbouring those hit by the Ebola epidemic including Mali, Ivory Coast, Senegtions neal and Guinea Bissau should prepare for the possible arrival of travellers carrying the deadly virus, the World Health Organisation (Who) said today.

“We want other countries in West Africa to be ready - bordering countries, Ivory Coast, Mali, Guinea Bissau - to prepare themselves in case people affected with the disease may be also travelling,” Who medical officer Dr. Pierre Formenty told a briefing in Geneva.

He said the UN health agency is not considering recommendation of travel or trade restrictions on the three countries already affected by the epidemic - Guinea, Sierra Leone and Liberia.